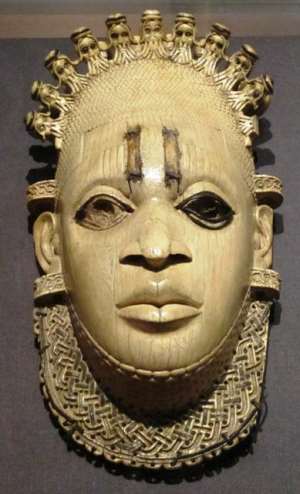 Various media, including the Art Newspaper www.theartnewspaper.com , and the Financial Times http://www.ft.com/cms have reported that Sotheby's, the auction house in London, will be auctioning a re-discovered masterpiece of Benin art, the ivory pendant of Queen-Mother Idia, on 17th February 2011 and other Benin artefacts from the Edo people. The pendant is expected to fetch £3.5-4.5 millions and possibly more. http://www.google.com

The Idia ivory pendant is one of the most beautiful pieces of art ever produced and its ownership has been subject of controversy.

This hip mask as well as all the many Benin bronzes, was looted by the British in the infamous punitive expedition of 1897 when the British invaded Benin, looted thousands of artefacts, burnt Benin City and sent the Oba Ovonramwen, the king into exile. Ever since then, the people of Benin and Nigeria have been asking for the return of at least some of the looted artefacts. The museums have remained deaf to the cries of the Benin people and often do not even bother to acknowledge receipt of such requests for restitution. The United Nations, UNESCO, several international conferences and ICOM have urged holders of the Benin bronzes to return some to Nigeria but nobody seems to pay any attention to the pleas of the world organizations.

Hitherto, many people have thought there was only one Idia hip mask, the one in the British Museum. A few people realized that there was another one in the Metropolitan Museum of Art, New York and one at the Seattle Art Museum as well as one in the Linden Museum, Stuttgart. Now we have the news of a fifth mask that will be sold next year. There is finally, the recently made mask for FESTAC 77.

It will be recalled that the British Museum has arrogantly refused to return to Nigeria, even for a short period, the ivory hip mask of Queen-Mother Idia which had been chosen as symbol for FESTAC 1977 (Second World African Festival of Arts and Culture ) and thus obliged the Africans and Nigerians to produce a new version.

The possession, selling and buying of Benin artefacts raises questions as to their legality and legitimacy, in view of their obviously violent and illegitimate removal from Benin, and the accompanying arson (burning) and destruction of Benin City for which, as far as I know, no compensation has yet been paid by those responsible for the destruction.

The legality of the selling and buying of the stolen/looted artefacts has not yet been the object of any judicial investigation and adjudication. The Government of Nigeria and the people of Benin (Edo) reserve their right to challenge the legality and legitimacy of the selling and buying of the looted objects. Incidentally, it is remarkable that many think only the laws of the Europeans are applicable to the question of legitimacy and legality of selling and buying Benin bronzes and other African artefacts. Why should we apply the laws of the British who came thousands of miles away from Europe to steal the properties of Africans? Why apply the laws of the aggressor and ignore the laws of the injured party, especially since the place of the initial wrongdoing is Benin? Has the law of the place of the act less importance that the law of the aggressor?

Although Britain invaded Benin City in 1897, it never formally declared war on Benin. Thus whatever may have been the rights of victors in wars never applied to the case of Benin. Moreover, since 1815, it had been accepted by European States that cultural objects of enemies were to be protected in case of military conflict and left intact. There was no provision for carrying away the cultural objects of the enemy. Where this was done, it was against the established norms.

It was never allowed by the laws governing nations on the African continent that one nation could collect wholesale the cultural objects of another nation, whether in peace or at war. These cultural objects are so intimately connected with deepest religious beliefs and practices of a particular people and could not simply be transferred to another people. This would have violated taboos and prohibitions in the cultures of those looting and those in the deprived society. Respect of the culture and religion of the other, was the norm even in war hence many conquered nations kept their own religion and cultural practices.

Despite United Nations and UNESCO resolutions as well as international conference conclusions and ICOM Code of Ethics, many Westerners, continue to write and argue as if nothing had changed in the world since 1879. They consider the resolutions of the international bodies as irrelevant even though the resolutions represent the views of the majority of humankind.

With regard to the projected sale of the looted Idia mask, one may expect that the Nigerian government and people, like the Chinese will protest at the selling of their national heritage and demand its restitution.

Are the present holders of the mask aware of the whole array of legal, political and cultural questions relating to the sale and purchase of the looted bronzes? One would expect auction houses to advise potential buyers about the controversies around those artefacts and their significance. Are the successors who are now proposing to sell the mask aware of what they could do to contribute to the reconciliation between Britain and Nigeria, supported by the entire African continent, from Cape to Cairo, to reduce the resentments, much alive now as in 1897?

What do the many Benin specialists in the West say about the proposed sale of the Queen Idia mask? Or are they not concerned or involved in such issues? Where are all the friends of Nigeria and Africa when it comes to matters of restitution of African cultural objects? Where are all those who wish to celebrate with us the 50th anniversary of African Independence?

Whatever the eventual outcome of the proposed sale of the Queen-Mother Idia mask, the controversies surrounding the nefarious punitive expedition and its aftermath are not likely to disappear since it appears there are many more of these artefacts in museums and private collections that are unknown to the general public. Even the museums refuse to give us sufficient information about “their” Benin artefacts.