Refrain from sensationalism, focus on economy - KB to media 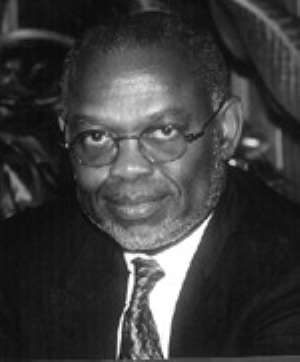 A former Finance Minister and an aspirant for the flagbearer position of the National Democratic Congress (NDC), Dr Kwesi Botchwey, has called on the media to de-emphasise its preoccupation with sensational issues and instead focus on issues of the national economy and other matters that directly affect the interest and well-being of the people.

He said vital economic issues such as the New Partnership for Africa's Development (NEPAD) and the adoption of a common monetary policy in the sub-region have not been seriously and deservedly discussed in the media.

Dr Botchwey said this in Accra yesterday when he paid a visit to the Graphic Communications Group Limited (GCGL) to acquaint himself with the operations of the company. In his entourage was Dr Musapha Ahmed, his campaign manager and MP for Ayawaso East, Mr Mike Gizo, the spokesman and MP for Shai Osudoku and Mr Seth Ofori-Ohene, the press secretary.

According to Dr Botchwey, even though the media has proliferated and performed creditably well, there is still more room for practitioners to improve on their professionalism.

He gave the assurance that if he is elected the President of the country, he will increase his interaction with the media to ensure the adequate dissemination of information through press conferences and the use of the Internet, among other means.

Dr Botchwey observed that even though some gains have been chalked up at the micro economic level, the lives of the people, which matter most, have not seen improvement.

“Much more needs to be done in the area of job creation which constitutes an important factor in the battle to reduce poverty and improve the wellbeing of the people,” he stressed.

Dr Botchwey noted that unlike it was in the 1980s and 1990s, there is much more space for developing nations like Ghana to manoeuvre in their relations with the IMF, World Bank and other development partners and urged the government of such nations to position themselves to take advantage of these opportunities to improve their economies.

He said for the country to make a meaningful advancement in its development drive, there is need to move into manufacturing and establish an export-led economy and stop the reliance on the export of primary commodities and the marketing of the finished goods of other nations.

He said there is widespread poverty in the three northern regions and pockets of the southern sector and indicated that if he wins the presidency, he will mobilise NGOs and the sons and daughters of the north across the world to assist government to reduce poverty in the area.

Dr Botchwey called on politicians to desist from making promises that they cannot fulfil and pointed out that some of these promises rather tend to fuel conflicts, resulting in loss of lives and the exacerbation of poverty.

On the party's primary election slated for December to elect its flagbearer, Dr Botchwey said the competition arising from his entry into the race has contributed significantly to rejuvenating and further energising the NDC and thus putting it in good stead to stake a claim for power in the 2004 elections.

“I have been very much encouraged by the warm and rousing welcome given me and my team in the various parts of the country that we toured and this has given me the hope that democracy and tolerance is deepening in our great party.”

“Additionally, I have been very much encouraged by the zeal, enthusiasm and dedication exhibited by our members and supporters across the country, especially given the rather difficult circumstances that many of them have had to operate in,” he stressed.

The former Finance Minister urged members and supporters of both camps to endorse and practise tolerance and mutual respect for one another so that the campaign can proceed in a civil and decorous manner.

This, he said, will help unite and make the NDC come from the December congress cohesive and ready to take power in the 2004 elections.

He pledged to work tirelessly to unify the party and involve all in the bid to regain power whether he wins or not. On his chances of winning the contest, Dr Botchwey said: “I will rate my chances as excellent.”

The Managing Director of GCGL, Mr Berifi Apenteng, said as a state-owned media house, the group is committed to balanced and fair reporting and endeavours to carry news from all facets of the society in spite of the resource constraints that confront it.

He said the group will fulfil its mandate by presenting views from all sides for the public to decide on the best option.

He also said the group tries to balance its role as a public media organisation and its commercial obligations, adding that even in the face of these contending interests the group is able to pay dividends to the state.