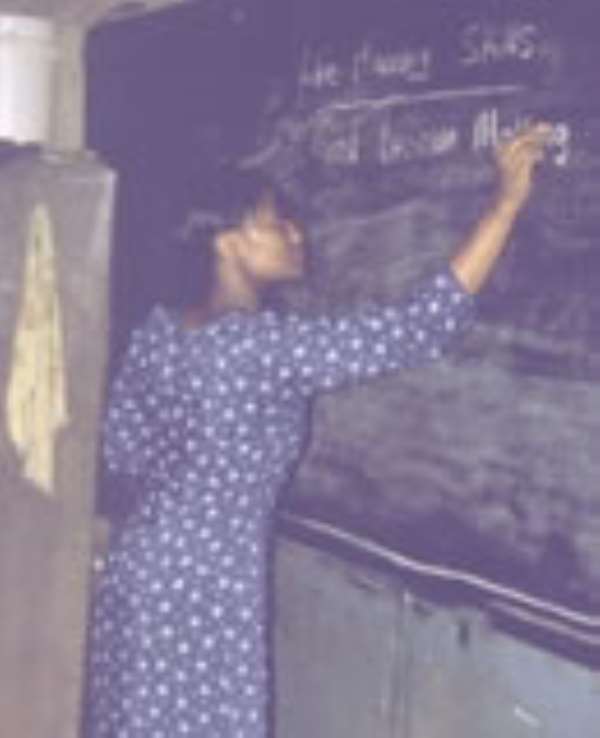 A recent survey conducted by the Ghana National Association of Teachers (GNAT) and the Tertiary Education Workers Union (TEWU) has made shocking revelations about the impact of teacher attrition on education quality and access. The study, for the first time puts a finger on how many education workers (90%) of whom are teachers, leave the classroom annually -10,000. This means that each year, as government employs six thousand new graduates from Teacher Training Colleges (TTC's), ten thousand teachers vacate the classroom, obviously in search of greener pastures in the private sector and other lucrative public sectors. Teacher attrition, apart from leaving empty classrooms and affecting the quality of education in Ghana, is by far the greatest source of corruption and financial waste to the economy of Ghana. This will be the spotlight of this report. The report will attempt an analysis of how the existing teacher attrition regime perpetuates endemic corruption to state resources, under the supervision of state institutions, especially the Ghana Education Service and the Controller and Accountant Generals Department.

It is a fact, widely acknowledged that it takes up to a year, for newly recruited teachers to receive their first salary, albeit the bulk in arrears. Reasons adduced by GES include delays in processing of salary documents and in the release of funds from the Ministry of Finance. The debate on whether this problem has a solution or not will continue, but is certainly of limited value to this analysis, compared to what happens to teachers salaries when they vacate their post. This writer's study, through observation and interviews granted to teachers who vacated their post months back has revealed that, they continue to receive their salaries in full, till up to five months after resignation. Yes! This is real, and understandable but not justified. It takes almost the same process and time to formalize teacher recruitment, as to formalize a resignation. The excuse normally given by District Education Officials that, teachers do not formally inform the District Education Office of their resignations, is neither here nor there. If Circuit supervisors are apt to their supervisory tasks, it should not take up to a month to detect a consistent case of teacher absenteeism, which should warrant the non -payment of salary.

The net monthly salary of a trained or graduate teacher averages 300-500 GHC. With teacher attrition, highly attributed to graduate teachers (and to a lesser extent, Certificate A and Diplomate teachers), an average salary of 400GHC means that for every other month, out of employment, Government pays GHC 4,000,000 as salaries to “ghost” teachers for no work done. The average five months transition period, (the period between the time teachers resign and the time they are released from payroll) means the Government may waste up to Twenty Million Ghana Cedis (20,000,000) on “ghost “teacher salaries in every year.

The education sector, in spite of its numerous problems, receive 31% of the national budget .The teacher wage bill is the largest item in the education sector's budget attracting over 75% of the education sectors 1.7 trillion GHC budgetary allocation in 2009. The large size of the sector and its budget makes it difficult to manage without effective decentralization of its financial resources.

Without effective institutional integration and manpower absorption, the decentralization of GES into the District Assembly can never be complete and efficient. Full decentralization of education management at the district level also entails the adoption of a composite District Assembly budget, which includes an education budget, managed by the District Assembly. District teacher payrolls will be the basis for payments, making it less burdensome, bureaucratic and easier to supervise and dispense quality service. Since the average teacher population on payroll per district is les than 2,000 it is even possible to conduct teacher census on a monthly basis, to ascertain the true number of teachers at post, who deserve to be paid salaries.

This will save the nation millions of monies paid to 'ghost teachers'. But the total decentralization of GES into the District is not without issues, if not challenges, first of which is the 'power syndrome'. The apparent unwillingness of the GES national and regional powers to let go power to the District Chief Executives is not a myth. The fact remains that, once GES is fully decentralized, decision making authority and responsibility will switch to District Chief Executives, making very little, if not useless, structures like the GES national headquarters in Accra and the Regional GES offices nationwide. It is also an unpleasant truth that the services of some 1,000 workers at GES regional and national may no longer be relevant and may have to be disengaged. The delay in the decentralization of GES into the District Assembly set up is not in the Ghana's interest. Government should demonstrate greater political will to fully decentralize education management in Ghana as a means of promoting accountability, transparency and judicious utilization of education resources. If this is not done, Ghost names will keep recurring on the education payroll.

The point must be well emphasized that DCE's need to be competent to be able to assume a supervisory role over education management at the district level. The appointment of DCE's for politically expedient reasons is another challenge. In countries like Brazil, where institutional integration and manpower absorption, has successfully yielded tangible benefits in public sector resource management, and improved the quality of social services (education, health water and sanitation), provision and management, mayors and councilors are elected by the people 'based on competence' and not appointed based on political affiliation. The reversal of the mode of appointing DCE's, as acknowledged by the current Government and the Kufuor administration, needs to see the light of day, soonest. It holds the key to fighting public sector corruption and strengthening citizen's participation in accountable governance.