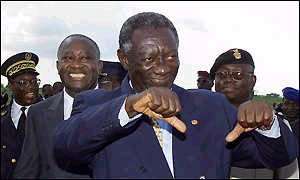 Fifteen Heads of State and Governments of the Economic Community of West African States (ECOWAS) would hold an emergency summit in Accra on Sunday, September 29. A statement from the Office of the President on Friday and signed by Mr Kwabena Agyepong, Government Spokesperson said the one-day summit would discuss the situation in La Cote d'Ivoire. It said the summit would be held at the Parliament House. The summit is to help find solutions to last week's uprising of mutinous soldiers protesting against what they said are "attempts to demobilize them from the army." They started firing in a bloody uprising last week Thursday and seized Abidjan in a protest that left at least, 250 people dead. The dead included former military ruler Robert Guei and the Interior Minister, Emile Bongo Doudou. The government of President Laurent Gbagbo called it a coup attempt and loyal forces quickly regained control of Abidjan. Aid workers in that country said on Thursday that nearly 4,000 people, mostly immigrant workers, had been displaced. Ghana offered her territory to the American and Indian governments to evacuate their citizens and the first batch of 18 students of the American Baptist International School, including a Ghanaian, who were evacuated from Bouake, in the Cote d' French help Ivory Coast fight rebels Sunday, September 29, 2002 -- France pledged logistical help to its embattled former colony of Ivory Coast on Saturday, as rebels moved to secure their territory ahead of a showdown with government forces. The mutineers in the north spread out along the country's western border, meeting little resistance. At least 270 people died in the first days of fighting after a failed coup attempt Sept. 19. French authorities said they had agreed to a government request for logistical help. Details on the type of support to be provided and the timeframe were not immediately available, a ministry official said. West African leaders planned to meet in Accra, Ghana, today at an emergency summit that is expected to consider deploying an intervention force in Ivory Coast. Fresh fighting before Ivory Coast talks Government troops in Ivory Coast have clashed with rebels about 40km (25 miles) north of the capital, Yamoussoukro. The fighting, which involved artillery, took place in Tiebissou, on the road between the capital and the city of Bouake, which is controlled by mutinous soldiers who staged an uprising more than a week ago. The military action comes on the eve of a summit on the crisis to be held in Accra, Ghana. During Sunday's meeting Ecowas, the organisation of West African states, will decide whether to commit any of its own peacekeeping force to Ivory Coast. Meanwhile, France has agreed to a request by the Ivory Coast to provide logistical support for dealing with the uprising, but a government statement from Paris stopped short of offering direct military intervention. Rebel success Defence Minister Moise Lida Kouassi said the government would launch a broad offensive very soon. We are going to launch mobile warfare across the entire territory - we have the numbers on our side and we have started to receive weapons with a capability superior to that of the rebels." Meanwhile, the mutineers said they were close to taking Tiebissou. A truck mounted with an anti-aircraft gun and crammed with mutinous Ivorian soldiers advanced spraying bullets into nearby bushes on the road leading to Tiebissou, an AFP correspondent reported. "The frontline is here," said a rebel leader who identified himself as Sergeant Hercule. Chary Paris The French Government has backed a proposal by Ecowas to send a force of 3,000 to 4,000 soldiers into the troubled country, the French ministry confirmed. According to the BBC correspondent in Paris, Hugh Schofield, France is much more reluctant than it used to be to get sucked into the domestic problems of its former African colonies. It is unclear if the Ivorian authorities have now provided information to prompt a more robust response from France, or if Paris has been stung into action by hostile press reaction in Ivory Coast, our correspondent says. But he says that France clearly does not want to end up with a complicated and costly military commitment, which may explain its clear support for a mooted West African intervention force there. PIC: Kufuor in Ivory Coast earlier in the year