Otumfuo Angry With Proceed On Leave 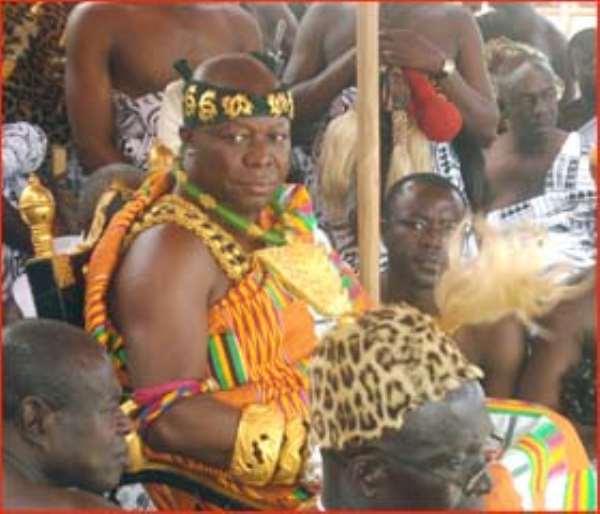 THE ASANTEHENE, Otumfuo Osei Tutu II, is fuming with rage over tribal politics in the country, warning the ill-fate trend could jeopardize Ghana's peace if it continues.

Calling for the immediate end to tribal politics, he disclosed that some public workers, notably Asantes, are being laid off from their work places without genuine reasons in the national capital of Accra.

Apparently gnashing his teeth over the unfortunate news, the Asante monarch condemned situations whereby a particular tribe was always being victimized, noting it could lead to mayhem.

Without mincing words, Otumfuo cited the erstwhile NPP government and the reigning NDC Administration of being culpable of the anomaly, stressing “it happened in Kufuor's era and it is now too.”

According to him, the country was not developing properly as expected because of tribal politics.

“Those who are qualified for a job are sacked for no apparent reasons and are replaced by those who lack expertise about the particular job. How do we progress?” he asked angrily.

Politicians, Otumfuo said, should think about the interest of the country first whenever they come out with any policy so that the country could be transformed to the delight of all.

The Asantehene was addressing a mammoth durbar of Asante chiefs in commemoration of the 75th celebration of the restoration of the Asante Confederacy at the forecourt of the Manhyia Palace in Kumasi on Sunday.

Otumfuo also condemned extravagant funerals in the country, noting the trend was not part of the Asante culture so the populace should desist from wasting all their resources on the dead to the detriment of the living.

The historic occasion offered the opportunity for chiefs loyal to the Golden Stool to pay homage to their overlord Otumfuo and renew their allegiance to him.

He warned chiefs to stay away from all corrupt practices which tend to demean chieftaincy as an institution and rather lead exemplary lifestyles to the admiration of their subjects, reminding chiefs that they are role models of society.

The king entreated chiefs, and for that matter parents, to invest in the education of their children to enable them become useful citizens in the near future.

He emphatically stated that gone were the days when the people used to engage their enemies at the battle fields, saying “the only weapon to conquer your enemy today is education, so send your children to school.”

Characterized by drumming and dancing amid the firing of musketry, the rich cultural event saw the appearance of the Golden Stool, believed to be the soul of Asantes, in public place.

The Asantehene charged chiefs to use monies raised from the sale of lands to develop their localities and stop enriching themselves with the resources of their stool, noting chieftaincy was a sacrificial job so chiefs should take note.

Otumfuo descended heavily on Asante chiefs who are fond of gossiping behind his back, imploring them to shun backbiting and be bold enough to confront him with their concerns so that they could solve them amicably.

He entreated chiefs to also avoid corrupt practices and rather follow his lead by being development-oriented, showing concern for their subjects and above all, using their offices to create jobs for the unemployed youth.

The ceremony was also used by fetish priests in the Asante kingdom to display their spiritual prowess.