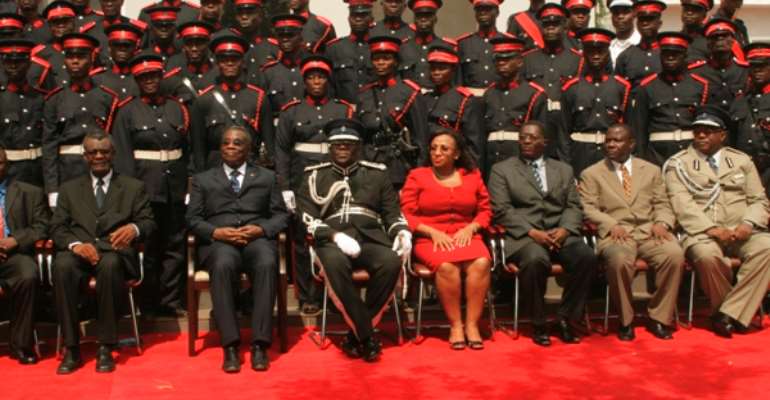 PRESIDENT MILLS IN A GROUP PHOTOGRAPH WITH COURSE 42 GROUP

recent times.
He however urged them not to be complacent in combating crime and

criminal activities.
He stressed that the successes chalked out so far in dealing with crime

should not engender any false feeling of complacency and contentedness.

expressed Government's support to the Service for combating crime,

especially armed robbery.
"I must say Government is extremely pleased with the way the Police

the IGP (Inspector General of Police) and his team for the work being done,"

graduates, including 15 women, and four from the Liberia National Police.

The Commission grants the Cadet Officers entry into the Senior Officer

Corps of the Police Service, with the rank of Assistant Superintendent of

Police College at Tesano in Accra.
The President told the gathering, witnessed by the IGP, the top

hierarchy of the Service, ministers of state and relatives of the graduates

that there must be no room for criminals to operate with impunity.

training relevant to the professional discharge of their duties.

Government is also working assiduously towards improving the necessary

logistics to enable the Service function at an optimal level.

Government's commitment to boosting their morale would not be short-lived.

He added that Government supported the Police Administration's

Strategic Policy Initiative to train and retrain personnel to constantly

build capacity to be abreast of modern methods of law-enforcement.

"As a nation, we cannot afford to rely on outdated methods of law

said.
He observed that there was a renewed sense of confidence in the manner

image to the Service.
President Mills directed the IGP and the Police High Command to put in

place adequate proactive measures and specialised units to deal with

criminals that would emerge as a result of the oil find.

The President, who was once the Chairman of the Ghana Police Council,

various parts of the world, especially Darfur.
"Government is committed to re-sourcing the Security Services to carry

out their mandated tasks and continue to bring glory to Ghana, President

He added that Government was also taking pragmatic and concrete steps

to provide more suitable accommodation to the Police Service.

President Mills reiterated, as stated in the manifesto of the National

Democratic Congress (NDC), that Government would not compromise on tackling

the illicit drug trade, and called on the Police to continue to be engaged

in the exercise of making Ghana an unattractive destination for the trade.

The President asked the new officers to be impartial, non partisan,

firm and fair in the execution of their duties, and be leaders who would

inspire their subordinates.
Cadet Officer John Atanga was adjudged the best at the parade, which

was under the command of Cadet Officer Emmanuel Dade.