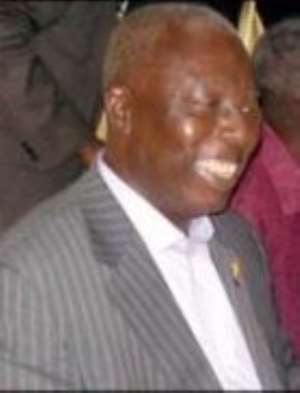 Ghana’s Ambassador to Japan in the previous administration, Dr Barfuor Adjei-Barwuah, has denied being involved in a $125,000 scandal during his duty tour as Ghana's representative in Japan.

Reacting to a Daily Graphic publication of October 7, 2009 which indicated that he had been cited in a $125,000 scandal, Dr Adjei-Barwuah, explained in a statement, that when he was appointed as ambassador to Japan in December 2001, Ghana's economy was not in good shape.

He said Japan had withdrawn a loan offer and also suspended the non-project grants that it offered to support Ghana's private sector.

He said the situation was a challenge to him to work to ensure that the Japanese government and people renewed their faith in and support to Ghana.

In pursuance of that objective, Dr Adjei-Barwuah said, he took the initiative to contact Lotte, a leading chocolate manufacturer in Japan, for some support for education in Ghana.

In response to his request, the Japanese company provided $25,000 for Ghana's Embassy in Japan on July 17, 2003 to sponsor two Ghanaian graduate students from the University of Ghana and the Kwame Nkrumah University of Science and Technology (KNUST) to undertake an internship programme in Japan.

He said on December 20, 2003, Lotte's donation was moved from the Ghana Embassy's Yen account to the embassy's property dollar account to protect the value of the donation.

He explained that because of the inability of the Ghana Cocoa Board (COCOBOD), the University of Ghana and KNUST to respond to the internship offer after he had made all the efforts, the Japanese company decided to withdraw the sponsorship package.

In view of the consequences of the withdrawal of the package on his credibility, as well as that of Ghana, said, he presented a new proposal to the company to give the funding to his charitable organisation to support lower level education and that the first three instalments would be spent on a school at Parkoso, his home village.

According to the former ambassador, the company agreed and subsequently transferred the funds to his charity account in Accra and the details of the transfer communicated to the company on July 30, 2004.

He said he did inform the auditors that to prevent the situation where in future he could be accused of taking government money, he was prepared to put the money in a government account on condition that the resources were spent on the Parkoso school because that was the basis for which Lotte transferred the money to his charity.

Later, he said, after the auditors had returned to Accra, one of them called his residence one evening and left a number with his wife as being the number of the account into which he should transfer the money.

said he could not make the transfer on the strength of a long-distance phone information, given the nature of the issue.

In the meantime, he said, the Ministry of Education sent experts to visit his home village school to assess the repairs needed.

He said the report submitted by the experts concluded that the Lotte money was not adequate to handle the necessary repairs.

said all relevant records showed that at no point did the embassy transfer any money into the charity account and “there is absolutely no truth in the allegation that l diverted any public funds into any account, private or otherwise”.