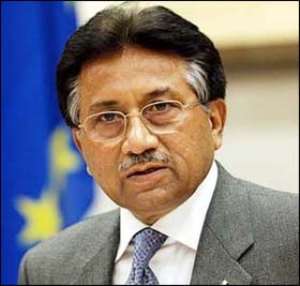 Pakistani police registered a case Tuesday against Musharraf over his order to arrest and detain judges in late 2007, the Pakistani High Commission in London said.

As a result, "If Musharraf returned to Pakistan, he would face a court who would decide whether he is arrested or released on bail," a spokeswoman for the High Commission said.

Musharraf now lives in London, England. His attorney said Monday night that Musharraf is on a global speaking tour and plans to return to Pakistan after it ends.

He gave no timeframe. The arrests and detentions came amid a state of emergency that Musharraf declared November 3, 2007, when he suspended the nation's constitution.

Chief Justice Iftikhar Chaudhry declared the action illegal at the time, but shortly afterward Musharraf had him expelled from office. Critics said Musharraf sacked Chaudhry because he was preparing to nullify his election the previous month to a third term in office.

In all, about 60 judges -- including 14 of the 18 on the Supreme Court -- were dismissed, and thousands of protesting attorneys were either arrested or detained in their homes.

Musharraf resigned in August 2008 under increasing protests and threat of impeachment.

This month, Pakistan's Supreme Court declared the emergency decree unconstitutional and ruled illegal all judicial appointments Musharraf made in the interim.

Last month, the Supreme Court ruled that the dismissal of Chaudhry had been illegal and reinstated him.