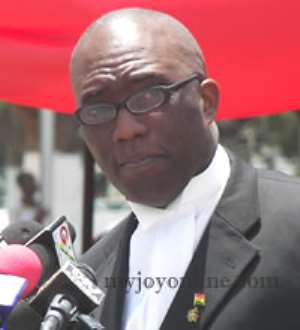 Ex-Attorney General, Joe Ghartey, says it is too early to expel MP for Bawku Central, Dramani Adamu from Parliament after a High Court ruling.

The Majority in Parliament have described as contempt of court the MP's presence in the House on Friday, following a high court ruling which barred him from holding himself as a parliamentarian.

The court's ruling followed a suit by a herdsman of his constituency who accuses Dramani of holding dual citizenship and thus does not qualify to be an MP.

The court awarded judgement in default of Adamu's failure to file processes to defend himself.

Majority Leader Alban Bagbin had threatened to 'uproot' Dr Dramani if he dared made an appearance on the floor.

But Joe Ghartey, who is also MP for Essikado said the Majority must “hold their horses.”

In an interview with Citi News, he said the Bawku Central MP should be allowed to exhaust all appellate bodies under the law before a decision to expel him from Parliament will hold.

He cited instances where he, as the Attorney General argued in favour of former Keta MP, Dan Abodakpi when the Majority then demanded that he (Abodakpi) be expelled following his conviction for willfully causing financial loss to the state.

According to Joe Ghartey, he wrote in the defence of Abodakpi at the Supreme Court sitting for the beleaguered MP to make a return to Parliament.

His decision to support him was purely based on his knowledge of the law then, and the arguments still holds in the case of Dramani Adamu.

He advised his colleague MP's to rise above partisan politics in the interpretation of the law.

The derobed MP was in the House Friday.