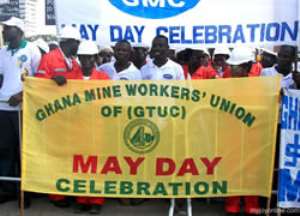 
The Mines Workers Union (GMWU) of Trades Union Congress (TUC) has added its voice to calls on government to re-assess all oil contracts signed between Ghana and foreign multinationals.

Mr Prince Ankrah, General Secretary of the union, said the call made by former President Jerry Rawlings, had come at the right time and therefore it must be taken seriously.

He said multinationals did not care to “milk” a nation since they have the intentions to leave after extracting whatever they wanted. They hop from one nation to the other, he added.

The Ex-President made the call about a month ago and reiterated it at a meeting with a consortium of investors led by Mr. Neil Mallan Bush, brother of the immediate past US President, George W. Bush late June.

The union urged the country to be wary of the multinationals that were committing us into contracts that could delay the benefits of oil resource for decades.

During this year's 'June 4th' celebration, which was held at Kasoa, the former President called for a thorough re-assessment of all contracts signed with the international oil companies and a complete disclosure of benefits to the country.

Speaking to the Ghana News Agency in an interview, Mr Ankrah said it was important to look into what went into the contracts and what exactly the country stood to gain or lose.

He added that what was happening in the oil sector was not so different from the situation in the mining industry, saying that in terms of royalties, mining companies were paying three per cent instead of six.