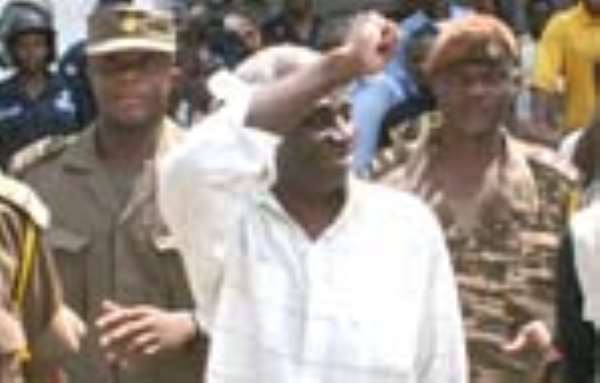 The incarcerated Ghana National Petroleum Corporation (GNPC) former boss, Tsatsu Tsikata, yesterday turned to God for salvation when after making a submission in an Accra Fast Track High Court to determine whether the Judge who jailed him was biased he quoted Luke chapter 12 in the Bible to encourage himself in the Lord.

Tsikata quoted verse four of the chapter which says “My friends do not be afraid of those who can kill the body, and after that there is no more they can do”, after quoting verse two which says “the leaven of the Pharisees was hypocrisy”.

The Attorney-General (A-G), Hon. Joe Ghartey, in responding to the application, also ended his submission by quoting from the beatitudes in Matthew 5:9 which says “Blessed are the peacemakers for they shall be called children of God”.

Even members of the “Free Tsatsu Now” group, after being told by a court clerk that Mrs.

Henrietta Abban had still not resumed duty so his bail application had to be adjourned, started singing gospel songs after one of their cheer leaders had said, “The Good Lord is Tsatsu's lawyer so let us pray”, to which they responded “Amen”.

However after sometime they reverted to their old style of singing, calling on former President Rawlings to “Tsitsiri Kufuor bo dadie ho ma yen”, to wit, President Kufuor should be tied to a metal, with the tune taken from Mama Esther's popular song, after which they sang “Won gbo waa, waa, waa”, meaning we are dying waa, waa, waa.

The applicant, former GNPC boss, had filed an application before Justice P. Ofori-Atta to determine whether Justice Abban, in dismissing an application just before giving judgment in which he had been sentenced to five years, really showed bias.

According to Tsikata, the judge, in dismissing the application, had shown bias so a trial-within-trial should be held to determine whether she was indeed guilty of the allegation which had been leveled against her.

However Hon. Ghartey told the court that the applicant had a similar application at the Supreme Court where he is seeking the supervisory role of the court to quash the judgment of Mrs. Abban by an order of certiorari.

Hon. Ghartey said both applications had the same motive since they had something to do with the alleged bias of the trial judge, adding that the Supreme Court application was slated for hearing on July 16, 2008.

He consequently prayed the Judge to stay the proceedings since they were the same in nature and purpose.

Explaining further he said the Supreme Court decision had something to do with the fact that there was an issue there for determination when the Judge went ahead with the judgment which he called “a desecration of Justice”.

He described the submission of the A-G as “not lacking only in candour but also on legal merit” but Mr. Ghartey took an exception to his language and said if he had been a practicing lawyer he would have been asked to apologise but Tsikata was resolute, saying there was nothing to apologise for.

According to the applicant the issue of candour was very critical to the case because the A-G had not attached transcripts of the ruling in which his application was dismissed when he told Mrs. Abban he wanted to introduce fresh evidence just before he was jailed.

The matter has been adjourned to July 15 for ruling.

Tsatsu was last month jailed after the court found him guilty of causing financial loss to the state and misapplying public property.

Among those who were at the court were Captain (Rtd) Kojo Tsikata, his cousin; Fui, his elder brother; Hon. John Mahama, vice presidential candidate of the National Democratic Congress (NDC), and Tsatsu's wife Esther Cobbah.