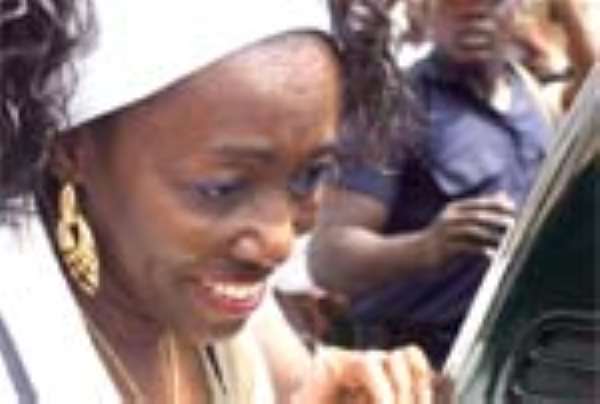 Barely forty-eight hours after making the controversial statement that she had documents to prove that President Kufuor and flagbearer of the New Patriotic Party (NPP), Nana Addo Dankwa Akufo-Addo were not lawyers, former First Lady, Nana Konadu Agyeman Rawlings yesterday appeared in court in connection with the fraudulent divesture of GIHOC Nsawam Cannery.

Mrs. Rawlings; Hanny Sherry Ayitey, Director of Caridem Development; Kwame Peprah, former Finance Minister; Emmanuel Amuzu Agbodo, formerly of the Divestiture Implementation Committee (DIC); and Thomas Benson Owusu, an accountant at DIC have been dragged to court for causing financial loss to the state to the tune of GH¢900,000.00 in the divestiture of the Nsawam Cannery to the 31st December Women's Movement.

They are also facing charges of conspiracy to commit crime, stealing, conspiracy to alter documents and altering of documents, and use of false documents to obtain public property.

Nana Konadu, who has been on trial with the other accused persons at an Accra Fast High Track, will be tried by a new Judge, Justice Edward Asante as the Judge who was handling the case, Justice K.A. Acquaye, has been elevated to the Appeal Court.

This brings to three, the number of Judges who have handled the case within two years. Justice Paul Baffoe-Bonnie, now a Supreme Court Judge, was the first to hear the matter.

Justice Acquaye, who was seeing the docket for the first time, said he needed time to go through it, and subsequently adjourned the case to July 18, 2008.

Lawyer Adjei Ampofo, who is part of the defence team, prayed the court to excuse the former First Lady on that day, and it was upheld by the court.

Konadu's lawyer, Tony Lithur, was not in court but his brief was held by lawyer Achie Danso.

The facts of the matter before the court were that in the 90s, Government received approval to divest GIHOC Nsawam Cannery, a state asset to Caridem which won the bid through normal process.

Caridem afterwards had to pay a 10 percent non-refundable commitment fee to the DIC in the sale of the cannery.

In addition, some amount of money was supposed to be submitted with the final Sales and Purchase Agreement (SPA) which was ¢2.7 million within seven months. But this was not done.

It was the Auditor-General, in pursuance of Article (121) of the Constitution, who realized the anomalies in the Cannery affair due to the fact that there were lots of discrepancies while even the SPA was not paid on time.

On receiving the 10 percent non-refundable fee, Mr. Agbodo allegedly went ahead to open an account without the knowledge of the DIC and deposited the money into it.

He was said to have told the factory manager that Caridem had fulfilled all the terms of the contract while the signature on the SPA was purportedly forged.

Nana Konadu, in an attempt to have the case struck off, has filed two applications before court, but both had been dismissed.

The first one was before Justice Baffoe-Bonnie, praying him to stay the case permanently or temporarily till the final determination of a civil case instituted by Caridem against the DIC and Attorney-General. But that was thrown out on the grounds that it was premature, and Justice Aquaye later dismissed her application before him on the same grounds.

Counsel for Mrs. Rawlings, Tony Lithur, had always maintained that the AG has acted in bad faith and had been capricious in his dealings with his client.

The AG has maintained that he was acting in accordance with the Constitution in an era of probity and accountability, adding that the options were still open for the First Lady to pay the amount lost to the state to bring to an end the legal tussle.

The court premises was besieged by supporters of the National Democratic Congress (NDC), who arrived in buses, holding NDC flags and singing “jama” songs. The scene was like a mini rally.

Konadu, after the court session, decided not to drive off immediately, but went round the court premises with her longtime pal Sherry, singing and dancing to gospel tunes from brass bands for about twenty minutes before finally leaving in her Toyota Land Cruiser.