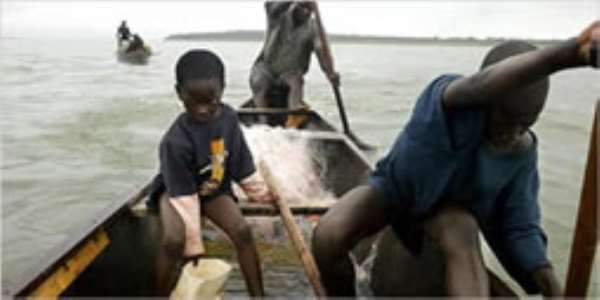 
Some 37 children who were sold into slavery to do menial jobs on the Volta Lake have been re-united with their families.

The children aged between six and 14 years had been working for their masters on the lake for years under harsh conditions.

The youngest (name withheld), a six-year-old boy, said he and his colleagues were forced to dive under the water to remove fishing nets often with fatal implications.

He and his colleagues have since their release in January been undergoing rehabilitation, receiving care, counseling at the Department of Social Welfare.

The International Organisation for Migration (ILO), the Ministry of Women and Children's Affairs (MWCA) and some local NGOs helped rescue the children.

In an interview with Joy News, the ILO's Field Manager for Child Trafficking, Eric Peasah, said the children are being reunited with their families on International Family Day to reemphasise the significance of the day.

He said under slavery, the children were seriously traumatised hence the need to drum home the message for parents to desist from selling their children into slavery for reasons of poverty.