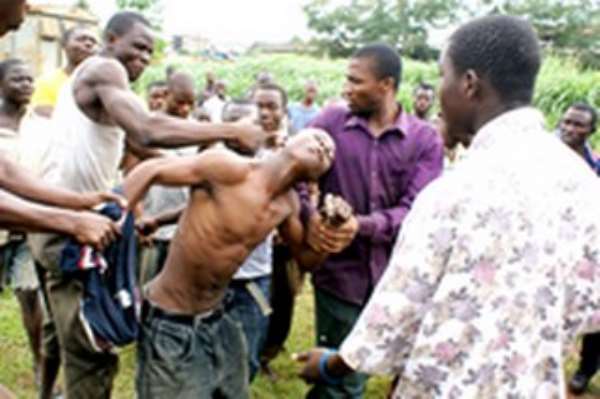 This suspected thief is being subjected to severe beatings by a mob at Asafo, a suburb of Kumasi, despite continuous police advice to the public against assaulting suspected criminals.

The suspect, whose name was given as Kwame, was said to be among a group of criminals who snatched a handbag containing an unspecified amount of money from a woman.

The other members of the group managed to escape but luck ran out for Kwame as he was apprehended and attacked by the mob.

But for the timely intervention of a military officer, he would have been lynched.

Kwame was handed over to the Kumasi Central Police Station, but a source at the station has told the Times that he was later released because no one came forward to lodge a complaint against him.

Mahama Lauds Rawlings For Opening Overseas Areas To The Worl...
15 hours ago