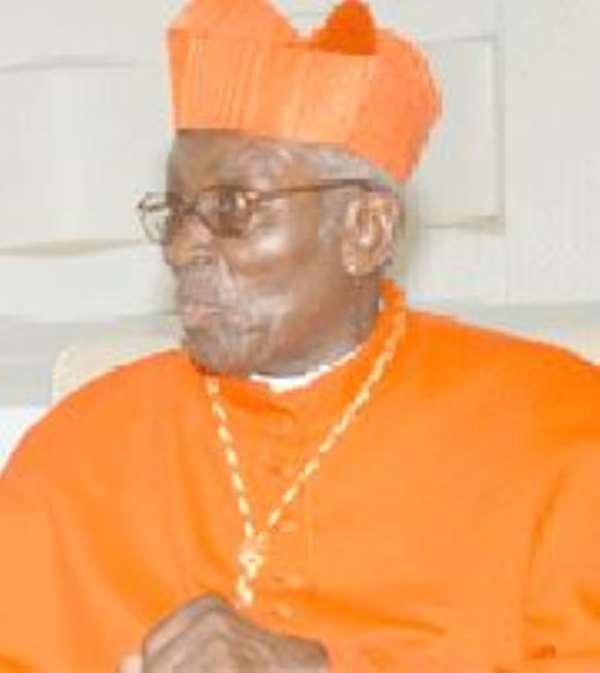 Residents of the Tamale metropolis, particularly Catholics will forever have fond memories of the late Archbishop Emeritus of Tamale, His Eminence Peter Cardinal Porekuu Dery.

To some residents it was too early for him to go to his creator while others saw his home calling as approved by God.


The mortal remains of His Eminence was laid to rest at the OLA Cathedral in Tamale last Tuesday. Cardinal Dery died on March 6, 2008 two months to his 90th birthday.

He was born in Zemuopare,a village five miles from Nandom in the Upper West Region on May 10,1918.


His death had caused heartache among a cross section of people whose lives he had touched in many ways when he was alive, both within the metropolis and the entire world.


Due to this his final funeral rites was ceremoniously attended by a good number of people to pay their last respects to their grand father, father and friend. Among those who attended the burial were President John Agyekum Kufuor and his Vice, Alhaji Aliu Mahama, ministers of state and members of the diplomatic corps.


Some residents told this reporter during the State Burial that they would forever miss the old man.


Two cameramen from the Eastern and Central regions indicated, “my friend, you have no idea the sort of things the Cardinal whom we call our friend had done to us; he was like a father and friend to some of us and that is why we have abandoned our work to witness this memorable occasion”.

During the rites some of the residents who filed past the body that was laid in state could not control their emotions as most of them wept bitterly. what a great loss!


However as expected, the Catholic Bishop of Damongo, Philip Naameh, during a vigil mass held for the late Cardinal entreated residents to endeavour to know the full meaning of death.


“We are here to thank God for everything and to deepen our understanding of what death meant; this should be a wake-up call on all of us to lead lives worthy of emulation” he pointed out.


The former Catholic Archbishop of Kumasi, the Most Reverend Peter Akwasi Sarpong also in a sermon during the funeral rites hoped that “this public recognition being given to this illustrious son of Ghana will ultimately help unite the people of the three northern regions.


Two journalists working with the Daily Guide newspaper and Diamond FM in Tamale were emotional when they told this reporter that “people must read the late Cardinal's book on his memoirs”.


To them the Cardinal's book was a reflection of who a true man of God was since he was virtually candid in his opinion about leaders who abused their office by engaging in all manner of vices.


No wonder the late Cardinal has a lot of achievements to his credit. These include the State Award of Grand Medal (civil division) from the Head of State of the Republic of Ghana on January 13,1974.

He was also a Council of State Member in 1972 and a member of the Ghana Education Service Council for seven years.


From 1994 until his death he organised a very active ministry from within his residence as he continued to receive visitors and celebrated many marriages and baptisms. His zeal and love for people did not go unnoticed by the authorities.


It is on record that he went to Rome in a wheel chair to receive the red bieratta from the Holy Father, Pope Benedict XVI.