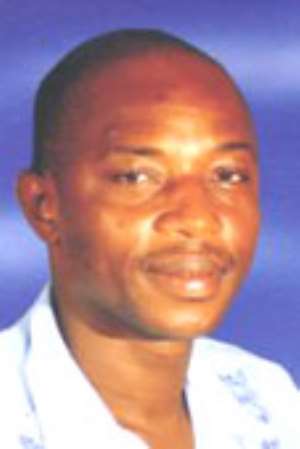 The Krachi-East District
Chief Executive (DCE), Mr.
Michael Gyato, has assured the people in the area, of government's continuous effort to help improve on the socio economic activities of the people, to ensure wealth creation.

He said it was the dream of government, to ensure that individuals achieve some sort of economic independence, without much concentration on the central government. According to him, development plans were channeled through the district assemblies, for the direct benefit of the people, whom he described as owners of local government administration.

Mr. Gyato gave the assurance at separate functions in the District, where he presented building materials to eight communities, which had their houses, school buildings, and other valuables destroyed by rainstorms and floods last year.

The DCE used the opportunity to caution the people against acts, which could destroy the environment, like bush burning, saying even though the government was poised to champion development in the area, it could not continue to spend huge sums of money on preventable disasters, mostly caused by the people.

Mr. Gyato also stressed the need for the people to adhere to education, in order to keep them healthy and contribute their quota to national development, and lauded the effort of the World Vision International, a non-governmental organisation (NGO) medical outreach team, which spent one week in the District doing eye-screening.

Addressing the medical team, later at Asukawkaw, Mr. Gyato said government recognized the important role played by NGOs, and affirmed the Assembly's preparedness to coordinate activities with such organizations, with the view to accelerating development at the grassroots level.

The Krachi-East DCE pointed that the eye-screening exercise, conducted in the area, was highly appreciable to the people, especially those at Asukawkaw and its surrounding communities, because they were living in areas where black flies were prevalent, hence the possibility of related eye diseases.

The Coordinator of the World Vision Medical outreach programmes in Ghana, Naa Maku Agyeman-Dua, explained that the exercise, which was an annual activity, was supported by the Vision Aid Eye Project in the U.S., and commended the Krachi-East Assembly for the support given to the team, during its stay in the area.

She said due to the high level of dust in the area, there was the need for the people to take medical advice on the protection of the eye, such as regular washing of the face with cool water, as a way of protecting the eye from all forms of infections.

Naa Agyeman–Dua disclosed that medical glasses, with a market price of GH¢150 each, were sold to the people at just GH¢1, to ensure that the large number of people who were suffering from various eye problems secured eye glasses.

An Ophthalmic Nurse with the team, Mr. Vincent Amewu, said eye diseases such as cataract, glaucoma, conjunctivitis, refractive error and injury to the eye, were identified in the area.

He attributed the high eye diseases, to lack of an eye clinic in the District, hence the people for years not visiting any hospital, to know the state of their eyes, noting that those whose conditions were bad, were referred to hospital for attention.