Work on returning refugees to Liberia-Kufuor 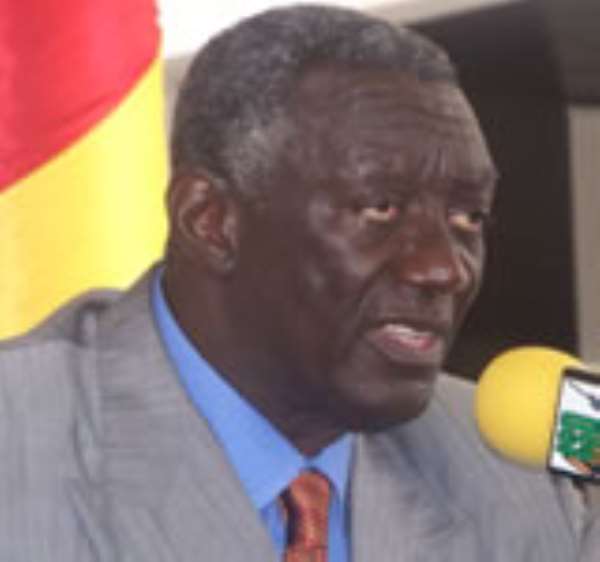 
President Kufuor has asked a Liberian delegation to work closely with the UNHCR towards returning the Liberian refugees to their country.

He said the situation that necessitated the staying of the refugees in Ghana had ceased to exist.

There was therefore no justification for the estranged refugees to continue to claim refugee status and to stay in the country.

The president was speaking at a meeting with a Liberian delegation that is in the country to try and resolve a stand off between the refugees and their almost 18 years' host.

He was not happy with the behaviour of the refugees which he said violated the country's constitution.

“We do not want a bad example that will influence the stability here”, he said.

President Kufuor explained that the government dispatched a contingent of police officers to the Buduburam camp to restore order when the refugees started their protest.

But the mainly women refugees decided to go naked to embarrass the security officers, he said.

The Liberian Foreign Minister, Olubanke King-Akirele, who led the delegation, expressed the hope that the refugee crisis situation would not tarnish the relationship between the two countries.

She said the delegation was consulting with the UNHCR to try and resolve the impasse amicably.

The Minister gave the assurance that no acts of vengeance would be perpetrated against Ghanaians living in Liberia.

Liberian refugees in the country have been protesting against the United Nations High Commission for Refugees (UNHCR)for the past one month.

They have been demanding a reparation fee of $1,000 but the UNHCR says it does not have that money for them.

The protesting refugees are also demanding resettlement in a western country.

A police action which led to some of them being taken to Kordeabe for screening has led to law suit against the government.

One of the refugees, Chausinda Lawrences has sued the government to produce his wife and justify her detention at
Kordeabe, which has been designated a refugee centre.

Meanwhile after President's comments the delegation went into another meeting with other government officials in their bid to resolve the matter.

The Deputy Minister of Information and National Orientation, Mr. Frank Agyekum sat in the meeting.

He told Joy News' Dzifa Bampoe that an agreement on the way forward had been reached.

He however noted that a conclusion was yet to be drawn after a few technicalities were resolved.