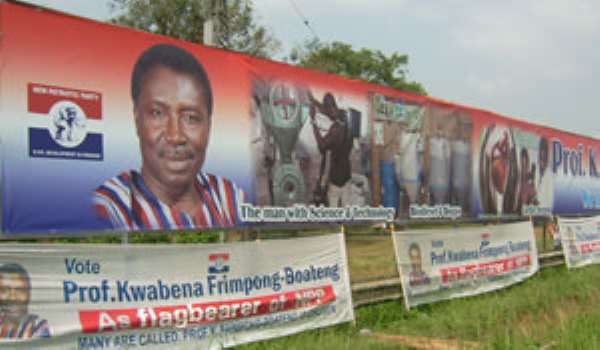 
In spite of the controversy surrounding political banners springing up all over the metropolis, NPP presidential aspirant, Prof. Kwabena Frimpong-Boateng's group of foot soldiers are the latest to have mounted the longest billboard of 114 feet and a giant balloon both adorned with positive accolades about him at the entrance of the University of Ghana, Legon.

When the Daily Graphic visited the scene which is gradually turning into a veritable tourist spot on Monday evening the group had finished with the billboard and were making efforts to mount it.

Visiting the Legon campus where the two day special delegates' congress of the NPP will take place, the atmosphere was electrifying.

Indeed, right from the entrance of the campus to the forecourt of the Great Hall, venue of the congress, were giant billboards, balloons and posters of NPP presidential aspirants.

The main entrance to the university had virtually been turned into a mini tourist spot with the adornment of various aspirants on giant billboards and balloons, all trumpeting the positive sides of the aspirants.

People were seen gathered in groups moving from one billboard to another in a discussion mood when the Daily Graphic visited the place on Monday and Tuesday.

Each day banners upon banners were springing up all over the place. There were giant portraits of many aspirants including Mr Alan Kyerematen, Prof. Mike Oquaye, Vice-President Alhaji Aliu Mahama, Nana Akufo-Addo, and Mr Hackman Owusu-Agyeman.

Other portraits were those of Dr Kofi Konadu Apraku, and Messrs Boakye K. Agyarko and Dan Kweku Botwe.

Adorned all over the capital, Accra, were also posters of political party aspirants contesting for various positions especially that of president.

Yaw Osafo-Maafo is depicted smiling broadly to victory with the inscription "proven performer".

Alan Kweku Kyeremanteng, whose portraits dominated, had "Alan Cash for Ghana, jobs for the people, cash for the people. Dr Kofi Konadu Apraku had a simple message, "Ghana's hope."

Aliu's other posters cited in town depicted him in a rich Kente cloth and presented him as the candidate of choice who represents the interest of the whole country and not only where he hails from. "One God, One Nation, One People" are the words adorning the captivating posters which had joined the others posted all over the capital.

It also had the NPP flag and motto "Development in Freedom" embossed on the top right corner.

His motto is "Transformational and Result Oriented Leadership".

Few of the CPP posters also cited within the Accra metropolis had 'Vote CPP, Dr Paa Kwesi Nduom for President 2008", Prof. Agyeman Badu Akosa had "Akosa 08, Akosa for President," Bright Akwetey had 'Save Ghana for a brighter Ghana and Vote Bright Akwetey as next President". "Vote for President George Aggudey", Vote Dr Kwame Osafo as CPP's Presidential flagbearer were others that were sighted.

In all of this, one hopes that they have gone through the due process to have their posters pasted and scattered across the capital.