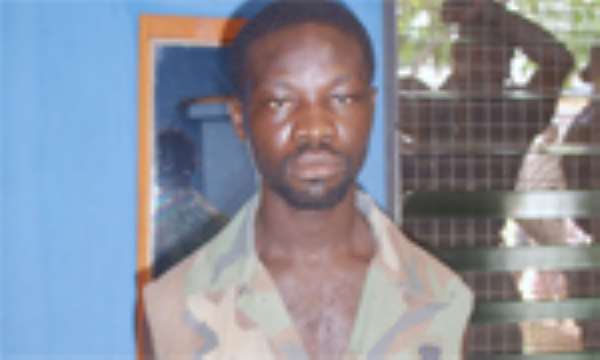 THE MAN, who killed an MTTU Constable at Asylum Down in Accra on Wednesday, has stated that he is a victim of an evil spirit which has tormented him for sometime now.

Narrating how he put a knife in the neck of Constable Moro Zakari, a native of Tumu in the Upper West Region, Yaw Dotse, who is being held at the Nima Police Station prior to his being remanded, held a number of police personnel and a team of journalists spellbound as they listened to his occasional incoherent narration.

A few hours after his arrest, he demanded for water and the policemen at the station bought some sachet water (pure water) for him which he gulped down.

One of the cops said, “After some time, he asked for food and when this was provided, he ate ferociously.”
Food, the cop said, was brought to him later by some relations of his.

He told his listeners that it was not his intention to kill the policeman at the time he wielded the two knives.

“I had two knives on me and at a point I clasped my two hands. At the time the stabbing took place, the policeman had knelt down and I swung my hands with the knives,” he said.

He accused the son of the proprietor of a drinking spot, a certain Emmanuel Ayiquaye Addy of engaging in spiritual activities with the intention of using him to become wealthy, or for “sika aduro” in local parlance.

As he narrated what happened, the suspect emphasized that he would prefer to speak the truth and said that when the police arrived at the scene in a red car, they ordered him to board it but he refused.

According to him, the police then beat him with sticks.
Continuing, he admitted that he took a quantity of alcohol prior to the incident, a fact captured in the earlier story on the subject and published by DAILY GUIDE.

Nii Ayiquaye Addy, the man who was allegedly targeted for elimination by the suspect, on his part, told the police that he and Yaw Dotse used to live in the same neighbourhood and that Dotse had been washing his father's car. He also stated that someone said he spotted the suspect smoking Indian hemp (wee) before the murder.

Before the incident, he said the suspect came and told him that he had a spiritual problem and would want him to accompany him to a spot.

“I told him I could not be part of it because it was not my problem but he insisted,” he said.

The suspect's uncle, Nii Addy said, told him to ignore the suspect because when he gave him a herbal concoction to drink and have his spiritual problem treated, he refused to do so.

On Wednesday, he said the suspect stormed De Gray Drinking Spot with knives and a certain Isaac Nartey, a friend of Nii Addy, was called via a mobile phone.

Mr Nartey contacted the deceased who had at that time gone to the Greater Accra Regional Police Headquarters to fraternize with his friends.

When the deceased got to the scene and sought to convince the suspect to drop the knives, he refused to budge and in the ensuing critical moments, Constable Imoro Zakari was stabbed in the neck. He did not survive as he was pronounced dead on arrival at the Ridge Hospital.

When DAILY GUIDE visited the residence of the deceased, his pregnant 26 year-old wife, Betty was sleeping on a bench surrounded by her relations who had come to console her in this trying moment.

When she later woke up sporting her black mourning dress, her eyes showed stress, and insomnia of the previous night.