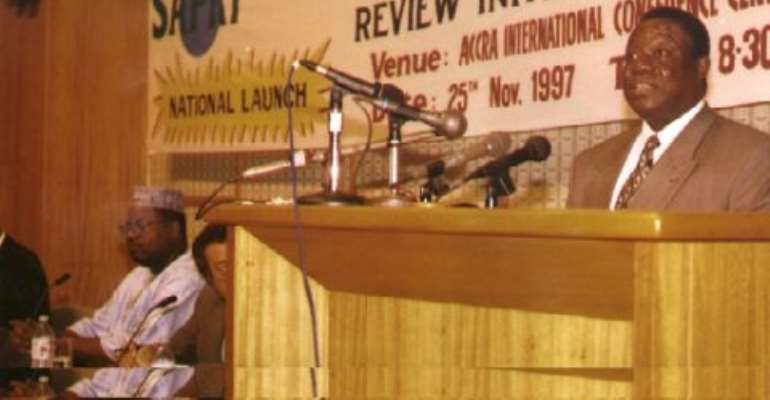 It is often said that nothing is worse than ignorance and that some persons are not happy except at the price of some ignorance. As I quietly glanced through my pile of newspapers for Tuesday, May 23, 2007, I came across a publication in the Daily Express newspaper captioned “NDC accuses gov't of misapplying GETFUND”. The source was attributed to Korku Anyidoho, the one in charge of communications for the thrice defeated Presidential candidate of the NDC, Prof. Mills.

The Professor and his team, who will stop at nothing to make cheap political capital of any given situation, sought to create the impression that the present government was diverting funds for undertakings and activities that the GETFUND was not meant for. This was in a futile attempt to convince embittered students of the University of Ghana that the rumpus over the new residential policy being introduced by the university authorities could have been averted if the NPP government was sensitive to their plight.

Among others, they claimed that contrary to the provisions spelt out in the Act, monies from the fund were being used for grant of scholarships, capitation grant, youth employment activities, and purchase of buses for secondary schools.

After a careful study of the GETFUND Act, and after listening to the Administrator of the Fund on some radio networks, I wonder if the plain lies churned out by people who claim to be fine gentlemen and decent politicians, the repositories of the solutions to all our national challenges (after being at the helm of affairs for close to 20 years) are born simply out of mischief or sheer ignorance.

In debunking the distortion of facts by “the apostles of integrity”, Dr. Fosuaba Banahene, the GETFUND Administrator, in an interview on Citi 97.3 Fm on Wednesday, May 23, 2007, said Section 2 requires that monies from the fund are to be used by institutions under the Ministry of Education for the development and maintenance of essential academic facilities and infrastructure in public educational institutions, particularly, tertiary education. Except to say that I may not be competent in the English Language, I wonder if buses that have been provided to secondary schools are not infrastructural facilities.

And to be specific on Legon campus (because that is where the below the belt propaganda were spewed out), infrastructural facilities that those who have eyes can see include, but not limited to: renovation and computerisation of the Balme Library (the extension and annex inclusive), the almost completed Law Faculty Library Building (which had long been abandoned), the new Agric. Faculty Building, Extension of the Political Science Building, and the Kwame Nkrumah Complex at the Institute of African Studies. I only hope that the NDC and Prof. Mills are not blind.

Another blatant lie and exhibition of narrow-mindedness of the NDC team is that part of the fund is being used to award scholarships in contravention of the GETFund Act. My God, someone should spare my ears!!! Section 2b of the Act talks about contributions to the Scholarship Secretariat. Is such a contribution to be there idle, or it is meant for disbursement to deserving ones? Well, I don't begrudge them. Their children studied overseas so they will not need the scholarships.

Also, Section 2d seeks to provide funds to the National Commission fro Tertiary Education (NCTE) for the grant of scholarships to brilliant students for further post-graduate studies. According to Dr. Banahene, some beneficiaries of this gesture are currently in some of the country's tertiary institutions, including Legon, complementing the academic staff of the various faculties.

One big lie and intellectual dishonesty displayed by the team that has been destined to lose any free and fair elections in Ghana (no wonder the bloody founder and father of the party is telling them to “go get it by force”) is that proceeds from the GETFund are been expended on the avowed Capitation Grant initiative. Dr. Fosuaba describes such statements as uninformed. He says not even a pesewa out of GETFund resources has been used for the capitation exercise.

On the Youth in Employment exercise, Dr. Banahene noted that the monies that have gone into it were to support some component of the education bit of the programme – allowances (not salaries) for teachers in the crush programme.

For me, one of the salient revelations of the interview with Dr. Banahene was the fact that “people should stop the argument that the fund should be used to provide accommodation at the universities because the Board cannot impose projects on them. It is the administrations of the universities and polytechnics that submit their priority needs”. He said it is even the board that sometimes stop tertiary institutions from buying cars when they so request. He said monies would be released for the building of hostels anytime the institutions so request. Before then, however, the board of the fund has offered, out of its own volition to build an 800-1000 bed residential facilities for Legon, UCC, and KNUST. He said the advertisements for the bids will roll out soon.

Countrymen and women, after all the above, what point do these malcontents, unarguably ignorant and from birth losers want to make? The answer can just be two – either pure mischief, or sheer ignorance, none of which can be celebrated as a virtue. If it is mischief, I dare say “I respect the man who knows distinctly what he wishes. The greater part of all mischief in the world arises from the fact that men do not sufficiently understand their own aims. They have undertaken to build a tower, and spend no more labor on the foundation than would be necessary to erect a hut. The innocence of the intention abates nothing of the mischief of the example.”

However, if it is ignorance, I may forgive them a bit because after all “when you do not know better, you do not really worry about failing.” My only problem with them is that to have spared themselves of the agony, they should have kept their peace. After all “nothing is good for an ignorant man as silence”, so says Saadi. But for this gross ignorance exhibited by the NDC's campaign team, I was yet to meet a man so ignorant that I couldn't learn anything from him.

Well, let us leave these propagandists and intellectually dishonest people alone. What is important is that the records have been laid bare by the administrator of the fund in question. At least, now we know that the GETFund has not been misapplied as alleged. We all now know that the purchase of buses for schools falls under section 2:a of the GETFund Law; provision of scholarships is catered for by 2:b; and also that no penny from the fund has been expended on capitation grant. Most importantly, according to Dr. Fosuaba Banahene, the GETFund Board cannot impose projects like provision of accommodation facilities on institutions. “It is the administrations of the universities and polytechnics that submit their priority needs”.