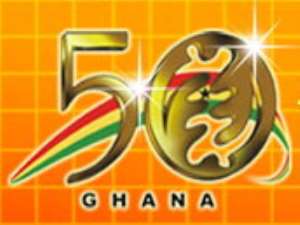 I have never seen such deluge of philanthropy in Ghana until high-energy errand captains of corporate Ghana kept doling out to government, fat cash cheques capable of turning a huge portion of the Northern Savannah Plains into virgin forest to a very worthy(?)cause-such as the [email protected] Independent celebrations.

Aside the US$20m or more set aside by the government that would be billowing its way in artificial twilight rendezvous throughout the year and on very phoney projects such as Greening Ghana, it beats any sane person's imagination how corporations go on a very careless spending spree, damning all the works of loud-mouth child rights, human rights and environmental activists who knock incessantly at doors of companies to either save a dying soul of a peculiar disease such as hole-in-heart or give a clutching straw to destitutes descending into the abyss of eternal poverty.

I have believed that corporations do not necessarily have to give out on the basis of corporate social responsibility (CSR) as their end products themselves are an indication of their responsibility to society since they satisfy a need.

But alas CSR has become a vogue and it is nice going for companies to establish desks that maintain what can be called, a second contractual arrangement between a seller and a buyer-only this time, the buyer shops on the whims of a perceived excessive profit maker. The first contract is an exclusive exchange of value for money in the good that is voluntarily traded.

Opposition to this might argue that the celebrations are a once in a life time and we need to lavish for not many would live to see another half century. Well, a panoply of reasons could be given but why not make it an annual affair then so we can attest to the astuteness of companies in giving away huge sums. It would then be clear that the over-hyped business environment in which they find themselves cannot support their arcane generosity due to excessive business regulations.

But the question to ask is, are these companies giving for altruistic reasons or coerced to give for fear of being economically victimised?

I dare say it is a very dishonest way of exacting privileges through bribes. It smacks of a very pedantic concept of corporate social responsibility, very arcane and asinine of the Russian concept of business and state relations if not the Chinese.

Against the usually emotive hatred for big business by statists and anti-development agents in the NGO and socialist realms , varied industry coercively give back to communities or commit to projects not for altruistic reasons, but as a show of proof for being good corporate citizens.

True, corporations all over the world are coming under attack for various 'unethical' and strange reasons; from declaring huge profits to 'exploiting' the labour force of a country. In an open society, these notions of business can harm the growth of the private sector and the entire growth projections of a country. What is worrying is that even in relatively free societies such as found in Ghana, with a government purporting to practice an open economy under the masked motto of “golden age of business”, very strange anti-business regulations such as a demand for a 30 per cent import levy on imported medicines remain on our statute books.

Yet, government encourages flagrant abuse of intellectual property rights with no clear legally enforceable mandate except a passive aggressive behaviour demonstrated in crotchety campaigns of rounding up pirates of music products. Where it matters most, the authorities have left close to 40 per cent of essential drugs counterfeited to the mercy of ingrained or institutionalised aloofness. When companies make their own efforts at curbing such economically deviant scenarios, not even the law will support them. I should mention here again that Ghana's Food and Drugs Board (FDB) is highly culpable.

Ghana's FDB has the penchant for telling pharmaceutical companies to seek redress in Ghanaian Law courts when pirates copy their drugs whose patents had not run out. So Imagine Ghana, a country whose judicial system is slow in disposing of over 60,000 land cases not to mention its institutional inefficiencies that fail to separate simple pirated music and video CDs from their original copies, veering into intellectual property right battles!

What about the alcoholic beverage industry? Months after we succeeded in asking government to shift tax regimes from a punitive ad valorem of 50% to a specific tax regime after almost seven years of economic miscalculations of the latter's benefits, the FDB in its authoritarian narrow understanding of the virtue of economics plans to implement a very a laughable edict on advertisement. According to the FDB's Guidelines on alcoholic beverage advertisement (FDB GL05/AD ALC/1-2005) Clause 3.1.4, “Radio and Television advertising shall be forbidden between the hours of 5:00 am to 10:00 pm.”

The directive adds that “These advertisements must be aired within half an hour of the advertisement promoting the alcoholic beverage.”

So how do potential consumers get to see the alcoholic beverage if there was a black out on advertisement? How do consumers get information about the qualities or otherwise of the products? How does the producer generate enough funds to pay employees and taxes? And who pays for the anti-alcohol advertisement? And of what use would that serve the product being advertised?

Well, apart from the error of concluding that manufacturers are ungoverned by the importance of consumer sovereignty, this very traditionalist economic view of advertisement represents in the words of Israel Kirzner “a kind of aggression in which a powerful advertiser wrenches the consumer away from the purchases which he deems the most efficient use of his budget and some how manipulates him into buying what the adevertiser wishes him to purchase”.

My only two cents for the FDB for now (as I shall return to this subject) is that any form of regulation orchestrated to alter advertising usually has the unintended consequences of doing more harm than good. In our effort to build a pluralistic society advertisement is essential to free speech.

It would be surprising if corporate Ghana were able to produce goods at affordable prices to their poor consumers after such incomprehensible laws. Incidentally, company public relations departments either run the risk of conflicting interests when they seek what logically is their right and by extension save the consumer from price hikes. And that is exactly where untainted pro-business think–tanks such as IMANI committed to a prosperous and freer world have the real capacity to deliver change needed.

Unfortunately, the business community has a very poor record of supporting pro-business, pro-market think tanks, the very organisations advocating significant reforms. Companies in Ghana understandably have no patience for reforms that take time. They think that in the long run we are all dead! But rent-seeking, however instantaneous the results isn't ethical either.

Perhaps Ghanaian companies like many in command controlled economies would like to be in bed with government exacting favours through sublime pats in brown envelopes apparently saying “these are the dividends of good governance and a golden age of business”.

But when you compare yourself to miniature minions, you run the risk of falling into ruinous mediocrity and I believe that, Ghana, being a forerunner of African Independence on this very difficult continent, soothing an intrusive orang-utan like governments to bask in endless waste when we have far more pressing issues such as our dire energy poverty, Guinea worm infestation and 17,000 Ghanaian lives officially lost to Malaria annually then corporate Ghana is in deed oiling the wheels of retrogression.

Perhaps corporate Ghana has to be reminded with the words of P.J O'Rourke that giving money to government is like giving car keys and whiskey to teenage boys.

Franklin Cudjoe is Executive Director of Imani: the Centre for Humane Education, a think-tank based in Accra dedicated to researching economic trends to glean public-policy insights for the benefit of government, business and civil society in Ghana. Send him an email at franklin-at-imanighana.org

I don't recall we ever changing a leader in the middle of a ...
12 minutes ago