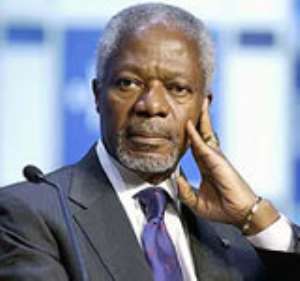 The Ghana @ 50 Secretariat on Sunday announced that the venue for the Golden Jubilee Inaugural Lecture scheduled for Thursday, January 25 has been changed to the National Theatre in Accra.

A statement issued and signed by Mr Henry Wellington Okyne, Public Affairs Officer said the time for the lecture remained the same.

A programme drawn by the Secretariat said it would be delivered by Busumuru Kofi Annan, Former Secretary General of the United Nations under the theme " Championing Africa's Renaissance: In Pursuit of Self-reliance and Sustainable Economic Liberation in Africa".

It said President John Agyekum Kufuor would be the Special Guest of Honour with Professor Adzei Bekoe, Chairman of the Council of State chairing the function.

Attendance is strictly by invitation.