In the DRC, how the elite use football to establish their reputation and stay in power 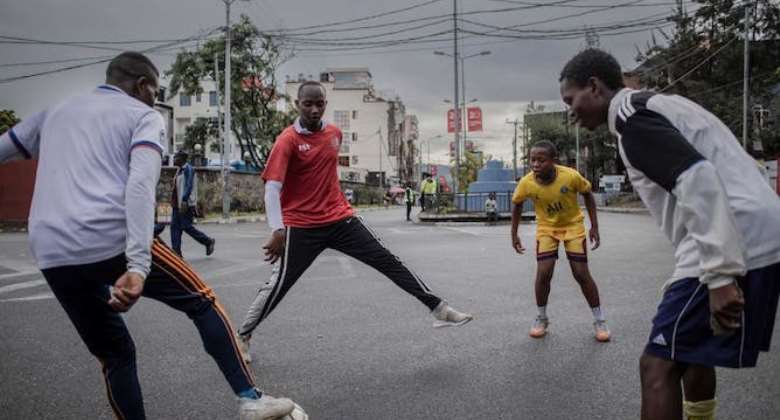 In the Democratic Republic of Congo (DRC), as in much of the world, football is intimately linked to politics.

In this Central African country, football clubs have long been a way for the regime in place to build political capital. Many politicians get involved in clubs to boost their image. On the other hand, football is also a space of political opposition.

In our recent article, we show how politics and football intersect in several ways in Kinshasa, the country's capital.

Football was particularly important to the regime of Joseph Kabila, from 2001 to 2018. It was a contested and repressive regime. Throughout his tenure as president, Kabila and members of his party have sought ways to improve their reputations to win votes. One of these means was to financially support football clubs. This worked because these clubs do not have structural or sufficient commercial or state support.

But our study shows that football politics can also work against a regime. During the Kabila years, football stadiums and crowds of supporters provided a relatively safe place to protest against the repressive regime. Anti-Kabila songs, for example, were often heard during matches.

football and power
Our interviews with supporters, regime figures and others revealed that during the Kabila years, supporters and club officials made a distinction between regime figures who supported the club and the regime. He often came back to this statement:

supporters always appreciated politicians associated with Kabila as long as they were able to give them financial support.

Gabriel Amisi (commonly known as Tango Four), for example, was a close ally of Kabila and currently serves as army general and inspector general of the Congolese army. Amisi was accused of a wide range of human rights abuses while serving as a rebel commander and army commander. A press article describes him as “the butcher of eastern Congo”.

Between 2007 and 2020, Amisi was president of AS Vita Club, one of the biggest clubs in Kinshasa and the DRC. Prior to 2007, the team's performance was poor. Under Amisi's leadership, the team won three national titles and excelled internationally. Players remember that his leadership brought them financial stability, with regular and quality salaries, and equipment supplies.

This made him very popular. When Amisi tried to quit in 2012 after AS Vita Club were eliminated from the Confederation of African Football Champions League, the team management and the club's supporters did not accept his decision. When protests began against Kabila's rule in Kinshasa in 2016, AS Vita supporters protected Amisi's house.

Human Rights Watch has documented how Amisi (and other elite figures) used football club youth league members to infiltrate protests against the Kabila regime “and incite protesters to loot and commit violence”.

Association with regime figures gives football clubs advantages, such as protection from prosecution if fans are involved in stadium violence. It is therefore of little interest for clubs to associate themselves with opposition figures, who generally have less money to invest and less political power.

In this sense, Congolese football is not very different from football in the rest of the world. It has been shown how across the world – not only on the African continent but also in various places such as Turkey, Indonesia and Malta – football helps regimes reproduce their hegemony, including by creating political capital.

Football and protest
But the reverse has also been demonstrated. Football has played an important role in contesting power. It has, for example, played a role in decolonization struggles in Zimbabwe, Zanzibar and Congo-Brazzaville, as well as the Arab Spring of the 2010s.

These dynamics played out in Kinshasa as well, where football fans participated in decolonization struggles. On June 16, 1957, a match between FC Léopoldville of Kinshasa and Union Saint Gilloise de Bruxelles of Belgium gave rise to the first riots that led to independence. A year and a half later, AS Vita Club supporters played an important role in the decisive riots against the colonial authorities. In 1960, the DRC gained its independence from Belgium.

During the postcolonial period, football also played a role in contesting power. Under Kabila, as political repression intensified in almost every other space, the football stadium became an important venue for political protest.

In the words of one football fan interviewed in our study:

Since we are in the stadium, we will not be arrested. The police know it: they won't try anything because we are much more numerous than them.

The lyrics of the protest songs and slogans - called "hymns of the oppressed" - included: "God does everything for Kabila to die!" and “Eeeh, we refuse (to be) the voting machine”.

During the "slip" period from 2015 - when Kabila overstepped the formal limits of his term - anti-Kabila slogans became even more popular.

The involvement of regime figures with football clubs did not overcome hostile feelings towards the regime.

Diet checks
The impact of these protests on the regime was, however, limited.

For example, under Kabila, radio and television stations cut their broadcasts when political songs were sung during matches involving the national team. And at the end of 2016, the Minister of Sports temporarily suspended the national football championship. The official reason was “excessive violence in stadiums”. But it was widely understood as a political move by the regime, fearing protests from supporters in reaction to the end of Kabila's official term during this period. A former minister confirmed this to us in interviews.

In summary, football in Kinshasa is politics - especially for the regime in place. Even if the political opposition can express itself through football, one can wonder what is the potential for change that this represents.

Under Kabila's authoritarian regime, the protest role of football was limited. The same is true under the current regime of Felix Tshisekedi, who uses football as a political tool. Kinshasa's main clubs (Daring Club Motema Pembe and AS Vita Club), for example, have presidents who are close allies of Tshisekedi.

By Kristof Titeca, Professor in International Development, University of Antwerp And