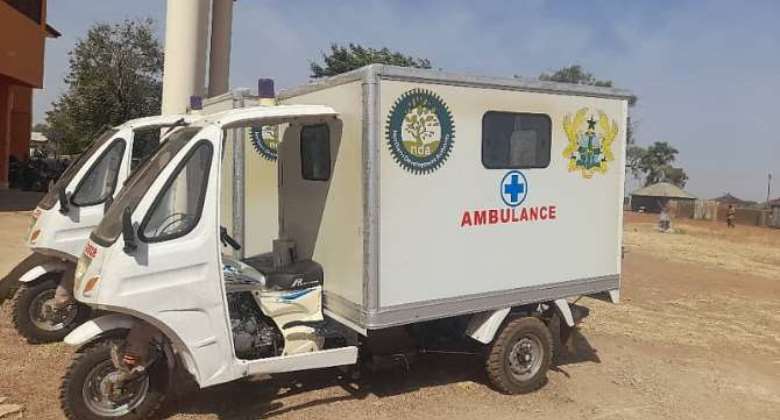 Presenting the ambulances to the District Health Director, the DCE said: “We are here present two motorking ambulances to the Tempane District Health Directorate. Already in the district, the government of Nana Addo Dankwa Akufo-Addo has provided one main ambulance for health services but it was inadequate because most of our communities are in the hinterlands. So, it is not possible for one ambulance to move to all the areas”.

According to him, the government under the one million dollar per constituency policy provided the two ambulances through the Northern Development Authority (NDA) for each assembly to improve delivery in the district.

“What I would also want to add on behalf of the assembly is that, am entreating the Health Director to make sure they put it to good use. Let’s all put our heads together in managing the ambulance, not the director alone. Because we are all in the district and we will see how it is used.

“If you see the driver using it in a way that is not the best, we shouldn’t wait till the health director to act. He may not see because we are the people in the community. So, anything that will not be in the interest of this and any other assets of the assembly, let’s all be concerned so that at the end of the day, our people will benefit from it," the DCE stated.

The Tempane District Health Director, Eugene Osei Yeboah expressed gratitude to the government for their kind gesture. He was confident the ambulances will benefit the people of the district, especially pregnant women.

“Sometimes, transporting pregnant women during emergencies to the nearest health facilities is very difficult. These ambulances will be able to mitigate some of the current challenges of transporting our clients to the health facility. We will also promise to put it to good use to be sure that the servicing is done periodically so that at least it can last long enough for us. We hope that it will be a good benefit to our community members” he emphasised.