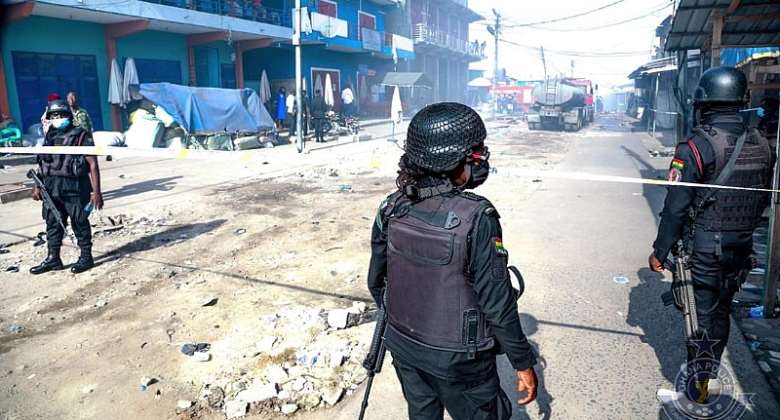 The Ghana Police Service and the Ghana National Fire Service (GNFS) have commenced investigations into the fire that gutted parts of the Kantamanto market on Tuesday, November 29.

Fire destroyed several shops and properties running into millions of Ghana Cedis on Tuesday, November 29 at one of the country’s markets.

According to eyewitnesses who spoke to Citi News, more than 15 shops were affected.

The Fire Service however managed to quench the blazing fire while receiving support from the Police Service and the National Disaster Management Organization (NADMO).

It is not immediately known the cause of the fire, but the ongoing investigations are expected to unravel it.

“The fire, which engulfed a section of the Kantamanto market in Accra on 29th November 2022, was successfully put out by the Ghana National Fire Service with the Police providing security and operational support,” police said in a statement.

“As part of ongoing police investigation processes, owners of the affected shops were conveyed to the Accra Regional Police Headquarters, where relevant details were taken from them. Also, Police clinical psychologists were on hand to offer psycho-social support to the victims. In addition, the Police refreshed the victims with food and water. In line with disaster management practice in the country, the victims were thereafter handed over to the National Disaster Management Organisation (NADMO).”

“There were no fatalities and the cause of the fire is not yet known. Meanwhile, Police and the Fire Service investigations into the incident continue,” part of a post shared on the Police Facebook page read.

Meanwhile, the Minister for the Interior, Ambrose Dery, was at the scene with the Inspector-General of Police to assess the extent of damage and interact with the affected traders.