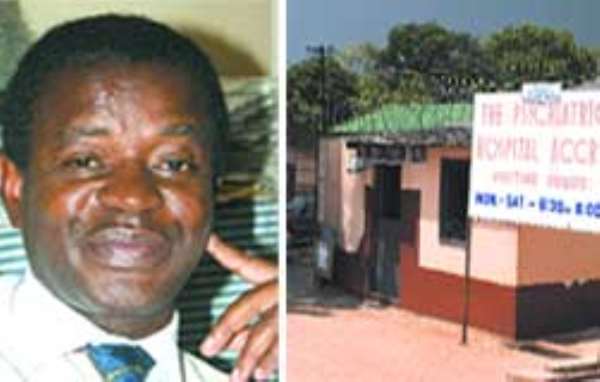 SOURCES CLOSE to the Accra Psychiatric Hospital has hinted that over one thousand inmates of the hospital are likely to starve if funds are not released within the next one-week for their feeding.

The Chronicle learnt that since the hospital authorities submitted its budget to the Ghana Health Service (GHS) in the last quarter of last year, it has not received the needed allocation for general management of the hospital and especially for feeding of the many inmates in the hospital.

Available information further indicates that the situation has been such that sometime during the first quarter of this year, authorities were forced to feed patients two times a day. Though patients were now being fed three times daily, the hospital was still relying heavily on creditors.

“There is a looming food crisis and if nothing is done about it, the patients will starve to death. The hospital is in this bad condition because the nation's health authorities do not take mental health seriously and as such do not give the psychiatric hospitals in the country the needed attention”, a worker at the hospital told The Chronicle.

The paper's investigations further revealed that the need to provide food for inmates of the hospital is so enormous that the hospital has little to take care of other problems since a chunk of the money the hospital receives goes into feeding, which makes the purchase of other products, such as disinfectants, difficult.

When The Chronicle contacted the Acting Chief Psychiatrist of the hospital, Dr. Akwasi Osei, last week Wednesday, he confirmed that indeed, funds for the general care of the hospital had not been forthcoming and stressed that if the situation persisted, inmates were definitely going to starve.

According to him, about a month ago when there was an imminent food shortage, they approached the GHS and Ministry of Health (MoH) and were given an amount of money that could keep the hospital till about next week, saying, “if by close of next week we do not have the money as the authorities have promised, then we will have difficulty in feeding the patients.”

He however noted that the situation did not affect the quality and quantity of the food given to inmates but admitted that no matter what, the quality of the food would not match that of the home, adding, “Once a while, some patients would wish to have more than they are given.”

This was corroborated by the unit head of Ward C1 and C2, Madam Thelma Tagoe, who said nurses on ward duties often tasted the food before serving patients and as such were able to point out lapses to those in the kitchen, while they also put such lapses into their report for submission to hospital authorities in charge of feeding for necessary remedy.

“Sometimes when they bring the food and we notice it is not enough, we go to the kitchen and when there is more they give us, otherwise we just have to manage what we have”, she explained and added that the forty male inmates in C1 and less than forty in C2 rarely complained about what they are given to eat.

Dr. Osei continued that the nature of drugs given to inmates often demanded constant feeding hence the need for inmates to be fed adequately to avoid the situation where some could cause trouble when hungry, such as attacking nurses and other persons in the hospital.

Also, he said inadequate feeding had the tendency to slow recovery rate of patients and add to the over-crowding in the hospital such as the present situation, where over four hundred inmates sleep on the floor.

The chief psychiatrist indicated that in the face of this present circumstance, the hospital was operating according to its priorities, of which food for inmates was very important, saying, “the attention on food diverts us from providing optimum care and look at other areas such as buying chemicals and fumigating the hospital.”

As to whether health authorities did not take mental health serious, his response was that there was a general disregard for psychiatry in the country, stressing, “when people hear the word psychiatry, they think of madness, which is not the case.”

To revert the situation, he said there was the need for health authorities to make meaningful the policy of providing psychiatric services for free by meeting the increasing demands of the psychiatric hospitals in the country.

According to him to the extent that providing free services for patients would obstruct quality care and maintenance, there would be the need for government to allow the psychiatric hospitals to charge for their services, adding, “what we charge now is not significant and it is just to let the patients value the drugs.”

He said the public's knowledge that psychiatric services were free, coupled with the stigma attached to mental illness prevented people from providing for their relatives and friends who are admitted to the hospital.

Dr. Osei mentioned that the issue of stigma was very serious and was one major factor that has led to the over-crowding in the hospital because many relatives of inmates were not willing to take them home for reintegration after they were cured and discharged.

He gave an instance when one man refused to take his mother home after she had been discharged, with the excuse that he should be given time to complete a building he was putting up before taking her home.

The psychiatrist noted that this man could never have given such an explanation to anyone in any other hospital such as the Korle Bu Teaching Hospital, saying, “this is the magnitude of stigmatization in our society.”

In addition, he called for continuous education on the subject of mental health to discard the stigma attached to it and as well make all stakeholders appreciate the magnitude of the present situation to put in place necessary measures to improve on the standard of the hospital.

On the sources of donations, he said they came especially from religious bodies and occasionally from corporate bodies and individual philanthropists.

He said donations from individuals were often received only when the hospital cried out for help, noting that constant care from the public would be of immense help.

When the Director General of the GHS was contacted on phone, he said he was very much aware of the situation, pointing out that there was not enough money but added that, “we have got some money and we are looking at how much we can give them.”

He however stressed that psychiatric institutions often attract the priority of the GHS and debunked the notion that the health sector did not take psychiatry seriously, lamenting, “if anyone thinks I do not consider mental health as important, then that is sad.”

According to him, the work was such that everyone needed to have some attention without focusing too much on one area, adding that the GHS would always give the hospital a priority as far as funds were available since they are aware the hospital had no other source of funds.

Further, he disagreed with the suggestion that government should consider allowing the public to pay for psychiatry services, because the family system had broken down and few people have family support especially, persons with mental health problems.

“It is not possible because if you have psychiatric problems, you can hardly do anything for yourself, especially in terms of finance”, he concluded.

Meanwhile, some individuals and religious organisations continue to donate in support of the hospital.