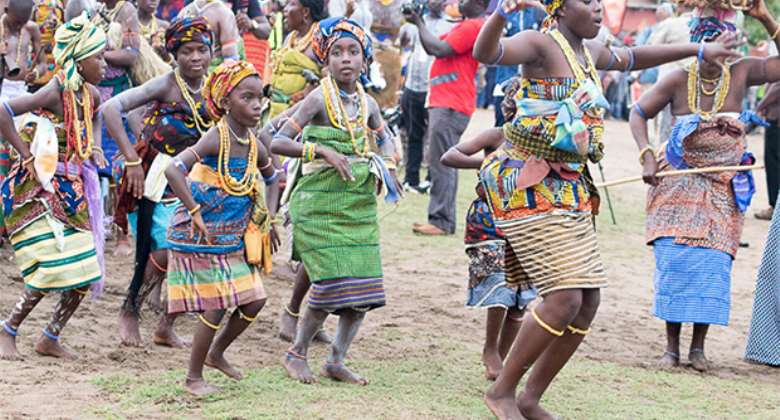 “Anlo kotsiklolo, naketi deka nor dzomebinu” (Anlo, the unified state, one firewood is able to prepare a meal (one man that can perform a task assigned to many men).

IT WAS not only historic, but also momentous' not only beautiful, but also colourful', not only epoch-making, but also apocalyptic.

It had been planned for over a month, but the climax was Saturday, 5th September, 2022. It was an occasion to mark the earth-shaking exit of a whole group of people from the claws of a wicked king, Agorkoli of Nortsie in Togo in the 17th century.

The heartless king was tormenting the people. He had a wall built around the city of Nortsie, and had ordered the decimation of the people, beginning from the eldest because they lead had killed his son. There was no way for revolt-just escape. The wise people from the east (Ewes) Egypt via Sudan via Oyo (Nigeria) planned a strategy. The women would pour water on a section of the wall over a period, to weaken it. A night was fixed for the exit. It was a night after they had displayed their unflinching loyalty to the king and his guards during the day-time. It had been a festive day, and the guards had got sotted with booze. Men, women, children, all were to beguile nature, and walk backwards. The footfalls in the morning, would only show the inquisitors, people walking towards the city not away from it. Some climbed over the mountain, Afadza, some crossed rivers, some came to Denu, Keta, Anloga-led by two heroes: Sri and Wenya

In 1865, King Kwaku Dua I Asantehene living in the interior with his people, all landlubbers, came to his brother, Sri,Awomefia and sealed a bond together with Akwamu in a war alliance. The trade-off: a section Anlo land to be called 'Kumasi'; for the settlement of Asantes; a section of Asante land to be called 'Anloga' for the settlement of Ewes. Many Anlo people came to Kumasi building Atakpame houses and roofing them; unfortunately, an equal number of Asantes did not go to Anloga. The Anlos in Kumasi settled in Anloga, and Asantes called them 'Anwona-foɔ'- dysarthria, that is difficulty in pronouncing words, would not be a bother to Asante-foɔ, provided they have their fufu to eat, their King to serve and their Kotoko Team to support. There was no pressure to trace their kins-woman, Ama Serwaa, who was married off to an Anlo fetish priest, even though the 'Habobo' family of Anlo trace their roots to the legendary Ama Serwaa, whose footsteps were taken by Nana Konadu Agyemang when she married Flt Lieutenant Rawlings. It cannot be forgotten that the successor to the wise ruler Kwaku Duah called Kofi Karikari presented a sword to Awadada Axorlu I, the military commander of Anlo, to seal the alliance.

All these, before the end of 1stWorld War, 1917 when the German colony of Togo was shared by French to the eastern part and English to the western part, ruled by France and Britain under the League of Nations, Anlo State was already part of the Gold Coast Colony, and the other parts of Eweland voted in a plebiscite to join Ghana in 1956, for independence in 1957.

This year's celebration saw the Asantehene, Otumfuo Osei Tutu Ababio and the Ga Mantse, King Tackie Teiko Tsuru II with a large retinue of chiefs and subjects, numbering almost a thousand attending. The theme of the festival was “60 Years of Anlo Hogbetsotso Za: Uniting for Development Sustaining Our Unique Cultural Commonwealth for Future Generations.” The term “Hogbetsotso” is made up of three Ewe words: “ho” (uproot) “gbe” (day) “tsotso” (crossing over). So, the word means literally, the day the people rose up and moved out of Nortsie.

Otumfuo Osei Tutu in an address noted: “Ashanti stands together in friendship and solidarity with Anlo in the spirit and letter of the alliance signed by our ancestors”. So, why should anyone talk about enmity between Asantes and Ewes? The Ga Mantse, in his turn, praised the Awomefia for remaining good allies with Gas.

The President was attending the conference on “Climate Change” in Egypt and it was the Vice-President who represented him. Dr. Mahamudu Bawumia was full of praise for the monarchs for leading the way and strengthening the bonds and unity among Ghanaians. Did anyone hear anything that had gone awry? Go and ask the people of Kormantse – why they gave the name “Kormantse” (I went there but did not hear). Our friend, Dr. Boafo Arthur of the Political Science Department, University of Ghana. could be of great assistance here. The representatives of Ewe-Fiaga of Togo, Togbe Agokorli IV from Nortsie must have rued the kind of treatment his ancestors had meted to the Anlos, but the African “Forgiving nature” must have worked like magic. There was a warm friendly embrace… with the delegation from Togo.

In his welcome address, Togbe Sri III, the Awomefia, cherished the bond of unity prevailing among the Ewes and Asantes. He urged the youth to note that all Ghanaians are one people.

There was an eclectic display of beautifully woven “Kente” and “kete” cloths Historians like Asamoah Yaw, Osei Bonsu may for long debate the origin of “kente” or “kete”, but we enjoy the music of Peki (Pakyi) born Ewe musicologist, Dr. Ephraim Amu. “Akyinkyin akyinkyin ama mahu nneɛma… Asante Bonwire Kente ne nwono mennhuu bi da…” (Tourism has led me to see many things. Asante Bonwire Kente weaving I had not seen…)

The Asantes think kente weaving was learnt from the mythical Ananse (spider) by the two brothers Nana Kuragu, Nana Ameyaw and their friend Nana Otaa Kraban. The etymology …” Kenten” (basket) is significant. The Ewes, like Prof. Devine E.A Amenumey, think some Ewes went to teach Asantes how to weave kente. The etymology “ke” (open) “te” (press). You know, in the past one of the questions at Catholic Catechism was, “Can you understand these supernatural beliefs: birth by Virgin Mary; Resurrection of Jesus?” Answer: “We can't understand but we believe them, because they were revealed by the Holy Spirit.”

We could also be bothering our heads about the background of Komfo Anokye, the legendary priest friend of Osei Tutu, who played a vital role in the successes of Asante wars, the establishment of Kumasi and the invocation of the Golden Stool (from heaven). The question at large is, was he a “priest from Nortsie”? Why would the Anlos play a key role in the burial of an Asantehene and the Asantes do same in the burial of an Awomefia?

Togbe Sri III, the Awomefia of Anlo, has demonstrated what love for our nation, Ghana, can do. For those of us in Asante, Otumfuo Osei Tutu II's visit with a powerful entourage of over 500 including Amakomhene Nana Adu Mensah Asare (who missed the funeral of his Kyidomhene, Nana Kwaku Kyere) has made us all proud. This is what Ghana's history should teach us: and who will blame us for cherishing the memory of our late teacher, Cornelius Amekugee, an Anlo…?