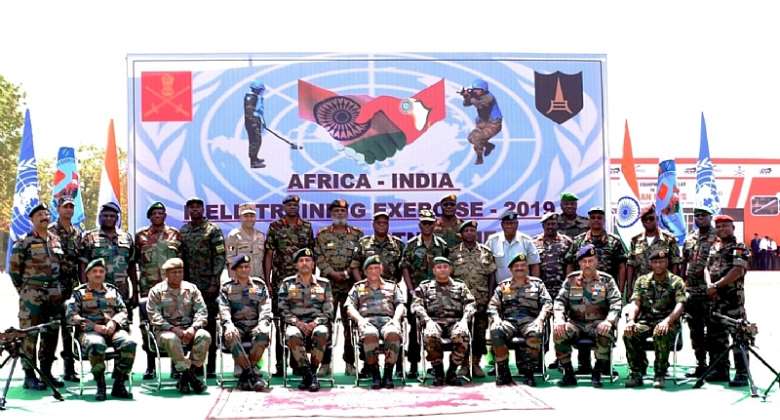 The DefExpo 2022 was held in Gandhinagar, Gujarat, from October 18 to 22, 2022. During the meeting, the size of India's flagship Land, Naval, and Homeland Security Systems exhibition ensured that DefExpo 2022 would be Asia's largest defence exhibition. The event gathered the nation's most advanced weapons and defence platforms under one roof. In fact, this was the first event dedicated solely to showcasing Made-in-India marquee products. Over 1,000 exhibitors registered, the highest number of exhibitors in DefExpo history.

The first IADD was held in Lucknow, Uttar Pradesh, in February 2020. Because the establishment of the IADD resulted in the successful institutionalisation of defence cooperation between the two continents, the Government of India decided to institutionalise the India-Africa Defence Dialogue as a side event alongside the DefExpo during the summit.

The second edition of the India-Africa Defence Dialogue (IADD) took place on the sidelines of DefExpo 2022. Its attendance by fifty African countries, including twenty Defense Ministers, seven CDS/Service Chiefs, and eight Permanent Secretaries, demonstrates the high priority given to India-Africa engagement in defence and security. The dialogue effectively highlighted several aspects of the event's theme, "India-Africa: Adopting a Strategy for Synergizing and Strengthening Defense and Security Cooperation."

In his keynote address, India's Defence Minister, Rajnath Singh, described the IADD's central theme as African and Indian nations' shared determination to explore new frontiers in defence cooperation, such as capacity building, training, cyber security, maritime security, and counterterrorism. He duly emphasised India's strong relationship with Africa, which is based on the regional cooperation framework known as "SAGAR" (Security and Growth for All in the Region) and is inspired by the traditional spirit of "Vasudhaiva Kutumbakam" (The World is One Family). In addition, he held bilateral discussions with several African counterparts from Mauritania, Gambia, and the Central African Republic (CAR).

The "Gandhinagar Declaration," which calls for increased collaboration in the field of training in all areas of mutual interest, was also endorsed as an IADD 2022 outcome document. The event's most significant announcement came from Defence Minister Singh, who announced the "India-Africa Security Fellowship Programme." The fellowship will be hosted by the Manohar Parrikar Institute for Defence Studies and Analyses (MP-IDSA). The fellows would be paid a stipend while working at MP-ISSA for one to three months.

Indeed, India has progressed from licence production in 1960 to its current 5th generation weaponry. India has prioritised the production of defence goods over the last eight years under Prime Minister Narendra Modi's leadership. Today, India has successfully established itself as an emerging defence manufacturing powerhouse, with numerous international orders won by Indian firms in recent years.

Indian Prime Minister Narendra Modi outlined the ten guiding principles of India's engagement with Africa in his July 2018 address to the Ugandan Parliament. Principle seven of India's development cooperation explicitly targets the formation of partnerships in the fight against terrorism, as well as the promotion of peacekeeping and cyber security. And, true to his word, security cooperation between India and Africa has become a significant area of collaboration in the last 4-5 years, generating unprecedented opportunities.

The Indian Ministry of Defence aims to increase exports to Rs 35,000 crore by 2025, up from Rs 13,000 crore last year. Africa will undoubtedly play a significant role in it. According to an India Exim Bank report, titled ‘Reinvigorating India’s Economic Engagements with Southern Africa’, was released on 1 November at the inauguration of the CII-Exim Bank Regional Conclave on India-Southern Africa Growth Partnership in Johannesburg, India has emerged as a leading defence exporter in recent years and may meet Africa's maritime, aerospace, and defence requirements, with Mauritius, Mozambique, and Seychelles becoming the major buyers of Indian arms between 2017 and 2021. As per SIPRI International Arms Transfer Database, India was the 23rd largest defence exporter to Africa during the same period.

Truly, Defence cooperation must be prioritised in the future strategic alliance between India and Africa. Both continents, in fact, have a long-term strategic need for military diplomacy. Over the years, India's approach to defence and security cooperation has remained natural and grounded in ground realities. It emphasises African counterpart empowerment through training, capacity building, and humanitarian aid. India's naval capabilities have become the "new frontier" in disaster relief and humanitarian assistance (HADR). India enjoys a substantial cost advantage over Africa's traditional security partners.

The IADD was successful in releasing India's Vision 2047. This was completely consistent with Prime Minister Narendra Modi's goal of transforming India into a powerful and independent country by promoting, showcasing, and establishing alliances for the country's aerospace and defence manufacturing industries with domestic and international clients. As the EXIM Bank report proposed, India also needs to change its current approach to defence and security cooperation with Africa and other developing countries, which is need-based and focuses on empowerment through training, capacity building, and humanitarian aid. The strength of India's defence manufacturing sector was demonstrated at DefExpo 2022 and this should now fuel the governments' and the country's overall drive "Make in India, Make for the World." Currently, Indian military vehicle manufacturers such as Tata Motors and Ashok Leyland are playing an important role in Africa's defence export. The time has come to move India-Africa defence cooperation to the next level.