Don’t accept excuses from Bawumia; throw him out in 2024 – Ofosu Kwakye charges Ghanaians 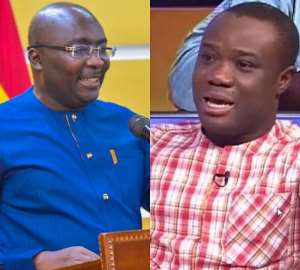 Former Deputy Information Minister under the Mahama administration, Felix Ofosu Kwakye has reiterated his stance that Vice President Dr. Mahamudu Bawumia has failed in the management of the Ghanaian economy.

In a post on his Twitter page on Wednesday, October 5, he urged the general public to reject any excuses from the Vice President regarding the poor state of the economy.

Relying on a projection by the World Bank indicating that Ghana’s debt to GDP ratio could be 104% by the close of this year, Felix Ofosu Kwakye has stressed that Dr. Mahamudu Bawumia who is preparing to contest the presidential election after Akufo-Addo's term expires must be thrown out in 2024 together with the New Patriotic Party (NPP) government.

“Our debt to GDP ratio will be 104% by the close of this year according to the World Bank. That means we will owe more as a country than our entire GDP. It was 56% in 2016. Do not accept any excuses from Bawumia. Throw him out in 2024,” the former Deputy Information Minister shared on his Twitter today.

Latest Photo Reports
Catch up with all the political quotes from our politicians.
Advertise here
More from Headlines
ModernGhana Links
Sammy Gyamfi pens heartwarming message to Mahama on his 64th birthday
You are a testament of God's goodness — Mahama’s Aide eulogies her boss on his 64th birthday
VIDEO: Speaker Alban Bagbin shows off ‘killer’ moves to celebrate Ghana’s win over South Korea
TOP STORIES