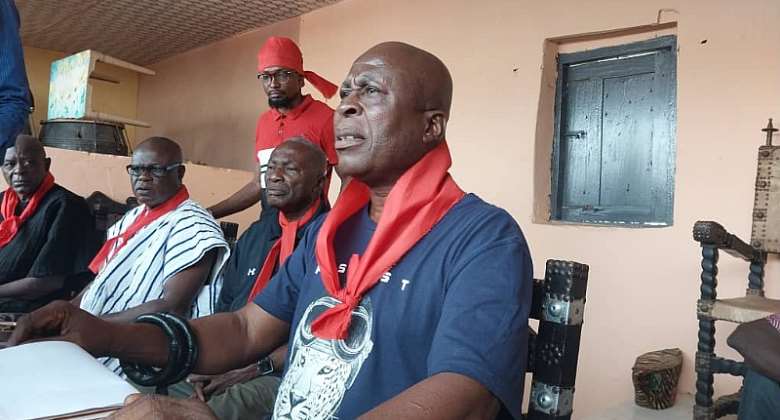 Tension is brewing at Asamang-Tamfoe, a community near Anyinam in the Atiwa East District of the Eastern Region over a community mining being undertaken by the youth of the area, which the Okyeman Environmental Taskforce is attempting to take control.

The angry residents have registered their displeasure with the Police and the Okyeman Taskforce for unleashing violent attacks that left many severely injured.

Last week, the Taskforce from Kyebi led by the Chief of Kyebi-Apapam, Nana Okogeaman Apegya III was seen in a video that has since gone viral exchanging gunshots with residents during an anti-galamsey operation in the area.

Thereafter, the Police in a Rambo style managed to arrest 16 youth from the area as some of the youth in the local community were injured by gunshot wounds.

They were taken to the Koforidua High Court Friday morning but the court was not in session.

A team from the Eastern Regional Police Command, led by the Regional Commander, DCOP Anderson Fosu Ackaah on Friday visited the Asamang Tamfoe community to engage the people.

The residents said the mining being undertaken by them is a Community Mining project which was launched by the Government recently and not illegal mining which the Taskforce was saying.

On Monday, scores of the residents mostly the youth in a red band stormed the chief’s palace to register their displeasure about the incident and also threatened to take the law into their own hands to fight back if the Taskforce return to the community.

The Benkumhene of Asamang-Tamfoe who is the Chairman of the Community Mining Committee, Nana Boakye Darkwa addressed a presser warning that they will oppose moves by all unauthorized persons from mining in the area.

He emphatically said they will resist attempts by any group including the Small Scale Miners Association- whose interest the taskforce allegedly acted- from embarking on any mining activity.

The sub-Chief who was cautious with his words said “Some individuals who are into mining came to the palace to inform us that they want to mine in our town, we asked them for their mining lease before we could grant them access but it’s been over ten years, they haven’t been able to produce a toilet a roll”.

According to him, the government has granted them all the necessary support to embark on community mining to save the lands from destruction by illegal miners.

He said “Today is exactly three months since deputy Minister Mireku Duker inaugurated the community mining in Asunafo and Asamang-Tamfoe. We have since been writing the wrongs so we could start working on the concession until the Eastern miners claimed our lands belong to them”.

He alleged that “They took us to Linda Dor with my Twafohene, Nana Asenso, and Okyeame Dwumor and promised to give us GHC100,000 and a monthly payment but we rejected it and told them we are looking at the interest of the larger community”.

He, however, called on the IGP to take up the matter and prosecute it as soon as possible.