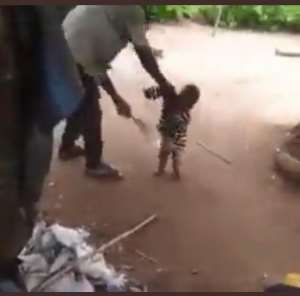 The Ghana Police Service is seeking help from the general public to locate and arrest the man captured in a viral video abusing a toddler.

In a video all over social media, the man is seen holding one hand of the little child and whipping him mercilessly.

Having cited the video, the Ghana Police Service has issued a press release calling on the public to help bring the man to book.

In the statement issued on Tuesday evening, the Police have indicated that it has set aside a GHS2000 prize for anyone that will provide information on the whereabouts of the abuser.

“The Police have sighted a horrifying video on social media in which a male adult is seen subjecting an infant to severe beating under a tree.

“In view of the urgency associated with the matter, a reward of GHC2000 has been set aside for anyone who is able to provide credible information that could lead to the arrest of the individual and rescue of the child,” a police statement has said.

Anyone with such information is urged to urgently contact the police on #0243809991.