Some kayaye girls do not detest inappropriate touching — Study 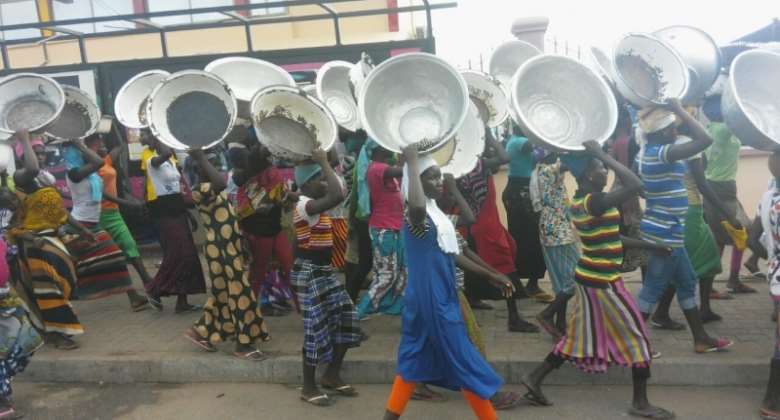 A study on Sexual and Gender-Based Violence (SGBV), unintended pregnancies and harmful practices has found that 13 per cent of “kayaye” girls interviewed in the Accra Metropolis do not think it is wrong when their bodies are being touched inappropriately by the opposite sex without their consent.

The study has also found that four per cent of the kayaye girls (head potters) do not see anything wrong with pressuring or forcing someone into sex, a situation which fuels unintended pregnancies amongst them.

This formed part of the baseline report (https://bit.ly/3Rt4RYo) on the Power to Youth (PtY) programme, which is being implemented in the Northern, North East, Savannah, Upper East and Greater Accra Regions.

PtY is a five-year programme, which began in 2021, and it is being implemented by a consortium of Civil Society Organisations (CSOs) namely Youth Advocates Ghana, Ghana SRHR Alliance for Young People, and Songtaba, and led by Norsaac, a human rights community engagement and policy influencing organisation.

The programme is funded by the Ministry of Foreign Affairs of the Netherlands.

The programme supports youth especially Adolescent Girls and Young Women (AGYW) from remote or marginalised communities in the Northern, Savannah, North East, and Upper East Regions to make informed choices, enjoy their sexuality and be free from harmful practices in a gender-equitable society.

The baseline report examined comprehensive understanding of adolescents and young people’s perspectives and roles on SGBV, unintended pregnancies and harmful practices in the country.

A total of 503 adolescents and young people between the ages of 15 – 24 years, 30 CSOs and youth advocates in the Builsa South District and Kassena-Nankana West District in the Upper East Region, Tamale Metropolis and Kpandai District in the Northern Region, and “kayaye” business areas in Accra were sampled for the study.

The findings of the report were presented at a regional level stakeholders’ forum in Tamale with the aim to find concerted efforts to solve some of the issues identified in the report.

The study found that while 60% of those engaged had some knowledge about sexual and reproductive health rights (SRHR) related issues, some of the knowledge that they had was full of misconceptions as some believed or understood that hormonal contraception bred infertility.

It was found that for those young people, their number one source of information on SRHR was their mothers, followed by their fathers and the least source was health workers, the reason for the misconception since they were not getting their information from qualified/right sources.

It found that in the area of CSO engagement, majority of the respondents indicated that they were included but they did not find their participation to be meaningful as 15% said they felt that their participation was meaningful whereas the rest felt it was more like calling them together and giving them information.

The respondents (girls) complained bitterly about societal actors because issues of SGBV, and unintended pregnancies were reported to chiefs, all they did was either be biased against them or be prejudiced about them leading to poor resolution of such cases.

Mr Anthony Suguru Abako, Research and Programmes Quality Coordinator at Norsaac, and Planning, Monitoring, Evaluation, Research and Learning Lead under the PtY programme, who presented the findings, said the issues identified meant that “We need to intensify sensitisation to get all stakeholders on board to address the issues.”

Hajia Lamnatu Adam, Executive Director of Songtaba said the findings were a true reflection of what happened in the communities and called for increased engagement of stakeholders especially at the community level for commitment toward addressing the issues.

Mr Mahmoud Haruna, Regional Budget Analyst at the Northern Regional Coordinating Council lauded the programme saying it would enhance human development calling on Metropolitan, Municipal and District Assemblies to cooperate and support partners on the programme to help achieve the needed results for the benefit of society.