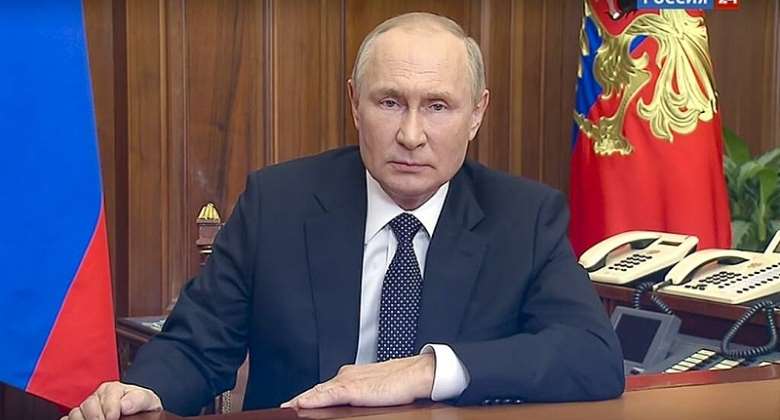 Vladimir Putin on Wednesday ordered an increase in funding to boost Russia's weapons production in a televised address to the nation in which he signed a decree on the "partial mobilisation" of his country to support Moscow's war effort in Ukraine.

Accusing the West of going beyond all limits in its aggression against Russia, Putin said Moscow had "lots of weapons to reply" to what he called Western threats, adding that he was not bluffing.

“If the territorial integrity of our country is threatened, to defend Russia and our people, we will use all means we have,” Putin told the nation.

"Those who try to blackmail us with nuclear weapons should know that the prevailing winds can turn in their direction.”

Russia's partial military mobilisation allows for reservists to be called up. It comes after the country's parliament this week approved tougher punishments for desertion under mobilisation.

Putin said the partial mobilisation was to begin immediately and that all citizens who are mobilised will have full armed forces status.

Western nations in particular condemned plans to hold urgent “referendums” on the annexation of parts of Ukraine that are under Russian control.

French President Emmanuel Macron told the UN that Russia's invasion of Ukraine harked back to an age of imperialism.

"What we have witnessed since February 24 is a return to the age of imperialism and colonies. France refuses this and will work persistently for peace," Macron said.

German Chancellor Olaf Scholz said Moscow would only give up his “imperial ambitions” if he recognised he could not win the war.

“Russia's invasion of Ukraine is a conduct that tramples the philosophy and principles of the UN charter ... It should never be tolerated,” Kishida said.

A United States official warned of “increased consequences” if Russia were to annex parts of Ukraine.

Russia's Defence Minister Sergei Shoigu said Wednesday that 5,937 Russian soldiers have died in Ukraine since the February military intervention, in a rare admission of military losses from Moscow.

"Our losses for today are 5,937 dead," Shoigu said in televised remarks, adding that Russia is "fighting not so much Ukraine as the collective West" in Ukraine.

Inflation will remain high till the end of first quarter of ...
40 minutes ago