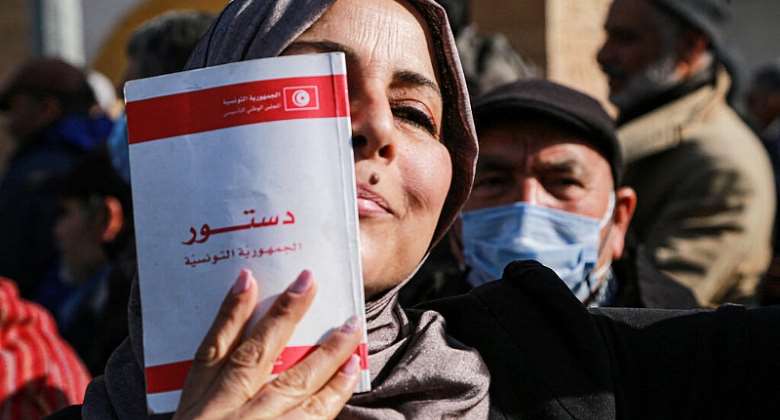 President Kais Saied has scrapped Tunisia's post-revolutionary constitution, tried to sack a majority of judges, stifled opposition and dissent, and rolled back democratic gains. However the judiciary is still holding on and pushing for positive change, says one prominent civil society leader.

“We've been living in a counter revolution for over a year – he's made a mockery of the election,” says Sihem Bensedrine, a Tunisian rights activist, referring to the undelivered promises made before Saie's election in 2019.

“He had this electoral legitimacy that he used to betray what he promised and said in his speeches, because he said he would protect and defend the constitution. He did the opposite.”

Under Saied's firm hand, a referendum was held on 25 July for a new constitution. It was overwhelmingly passed with 94 percent voting "yes", but only 30 percent of Tunisians turned out to vote.

However, the text of the reformed constitution was never discussed in any campaign or debate, and those who drafted the text said was quite different from the original they had written and “provided for serious perils to democracy.”

“He has already taken all the power, but the good news is that Tunisians are not ok with this, and they are trying to resist,” she tells RFI.

The fight for a stable and fair judiciary within Tunisia continues, says Bensedrine – adding “the backbone of the resistance against the dictatorship is the magistrates, the judges.”

A tit-for-tat struggle between the Saied-controlled Ministry of Justice and the Tunisian judges began in June, when the President sacked 57 judges.

His edict sparked a hunger strike by judges and condemnation by the United Nations.

On 9 August, Tunisia's Administrative Court suspended the dismissal of 49 of the 57 judges, which the Ministry of Justice addressed five days later on its Facebook page, informing the judges they were now “subject to criminal prosecution.”

The members of six legal associations, under the umbrella of the Coordination of Judicial Structures (CJS), issued a statement on 18 August, calling for Saied to “put an end to these abuses committed by the Ministry of Justice, which undermine the image of Tunisia and its sovereignty".

A number of political parties emerged, including moderate Islamist party Ennahda, to deal with the transition back to democracy.

However, 11 years later, Tunisians are disgusted by how the country has been mismanaged by Ennahda and other parties in coalition like the secular Nidaa Tounes, says Bensedrine.

“We've had a carousel of heads of government in a very short time instead of reforms, which the country needed,” says Bensedrine, referring to the 10 prime ministers in 10 years.

Tunisians craved a change, which they thought they found in Saied.

“'Me. I've stopped this circus. I've cleaned out the corrupt political class, Ennhada. And now I am the purist, and I will bring you cleanliness; I will fight corruption,'” Bensedrine says were Saied's campaign refrains.

Bensedrine was among those who had voted for the innocuous, unknown professor who reassured everyone that he would protect the 2014 constitution. Saied won by a comfortable margin against a corrupt businessman.

“But the people were far from imagining that it was going to be worse than what they were fighting against.”

Freedoms have been rolled back, including personal freedom, freedom of the press. The economy is in freefall.

“Spending power has decreased by 10, people have difficulty making ends meet. It's been a pauperisation of the middle class.”

One holdover from the Ben Ali era is the police, who have the authority to do what they want, says Bensedrine.

“Bloggers who criticise the government they go and look for them in their homes and put them in prison. The people who criticise are stopped,” she says, noting that those who are brought to court are summoned to military court, under the authority of the army, and Saied.

While civil society is fractured and Tunisians have lost hope in all political parties, Bensedrine maintains that people have hope in the power of an independent judiciary.

Tunisians are slated to go to the polls in December to elect their parliamentary representative.

Bensedrine says the elections cannot be used as a benchmark for change, as the body supervising the electoral process is completely under the control of Saied.

Political parties and civil society, even if they gain strength between now and December, will not have the backing of the people, she says, adding that even if few people come out to vote, the elections will not be free and fair.

Renewed efforts by civil society in January, typically a time for Tunisians to regroup, is the time to watch, especially after the expected sham elections in December.

“After the revolution, Tunisians won't accept being governed by a dictator. That is certain,” says Bensedrine.