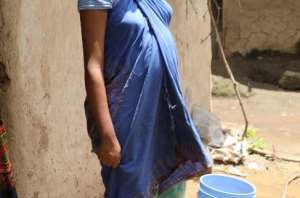 Lack of a toilet facility in a school in Accra has caused the pregnancy of a 15-year-old Junior High School (JHS) student.

Names of the student and the school including the headmistress who made the disclosure, have been withheld to avoid name-shaming and stigmatisation.

The bizarre revelation was made in an interview on the "communal labour show" which airs on Original TV under the auspices of the Africa Schools Sanitation Foundation (Afssaf).

Afssaf is a wholly home-grown apolitical, non-ethnic and religious aligned movement aimed at providing decent urinal and toilet facilities in Ghana and beyond.

So far, the foundation has built and renovated urinals and toilet facilities in four schools across the country.

As part of efforts to further extend their activities to the citizenry and seek support, the foundation hosts a programme dubbed "communal labour show" on original TV on Saturdays at 9:00 pm.

In the last episode hosted by Messrs Prince Osei Tutu and Kwabena Antwi Boasiako, president and chief executive officer of the foundation respectively, a headmistress of a school in Accra, made a shocking revelation.

The unnamed headmistress revealed that a 15-year-old student of her school (name withheld) is currently pregnant due to the absence of a toilet facility in the school.

She noted that students are forced to attend to nature's call outside the school.

In the case of the pregnant girl, she stated, "Anytime I went to the class and asked of her, I was told she has gone to toilet outside the school."

This according to the headmistress continued until they realized the said student was pregnant.

Attributing the development largely to the non-availability of a toilet facility in the school, the headmistress noted "though per Ghana Education Service (GES) regulations, schools are supposed to have toilets and urinals, the spectacle, unfortunately, is different on the ground".

She therefore applauded the efforts of Afssaf and called on the populace to support the foundation in the realisation of its cherished vision.