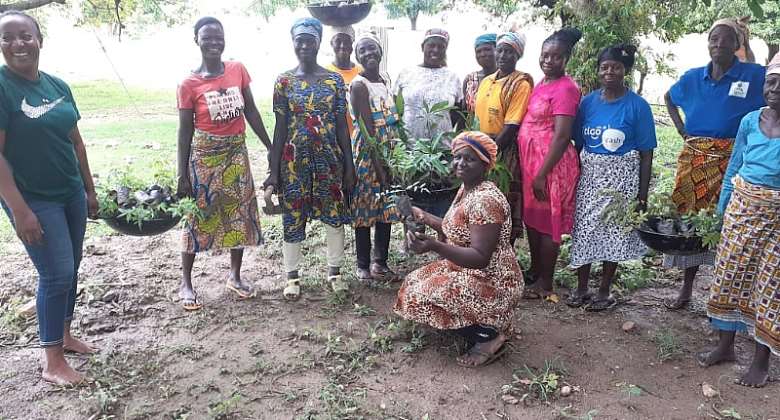 - Conveying of trees from forestry for planting

The Maltaaba Peasant Women Farmers’ Cooperative in the Upper East Region with funding support from the Forest and Farm Facility has planted about 1000 tree species on a parcel of land acquired by the group at Yarkot community in the Nabdam District of the region.

Speaking to the media during the planting exercise in the community on Saturday , the Executive Secretary of Maltaaba Peasant Women Farmers’ Cooperative, Lydia Miyella Lydia, stated that the Maaltaaba women group with funding support from the Forest and Farm Facility was implementing a climate change Resilient landscapes and improved Livelihoods project in the area.

She stated that through the project the women’s group had been trained to go into compost manure making for nursing of seedlings for planting and also for sale to other organizations in the future. And stressed that trees are very important for human existence on earth and regretted that due to the growing population in the world, trees are cut down every day to build factories and houses.

“It is anticipated that this support will help create a long time sustainable and full-time employment for the community of Yakoti and its environs especially the beneficiaries of the group who are mostly widows and single mothers. This will ensure food security for farmers, reforest depleted land. . The trees will survive for the next generation”, she stressed.

The Executive Secretary who stated that the group had also established ½ acre woodlot for domestic energy income and environmental conservation, urged the group to take the exercise seriously and stressed that” trees contribute to the environment over long periods of time by providing oxygen, improving air quality. Climate a melioration, conserving water, soil and supporting wildlife. During the process of photosynthesis trees in carbon dioxide and produce the oxygen we breathe”.

Before the tree planting exercise, a technical man from TRAX GHANA, Mr Solomon schooled the participants on the benefits of tree growing such as prevention of soil depilation and fertility, fuel wood, housing material, fruits, and livestock fodder. He advised them to take good advantage of the intervention to improve upon their livelihoods.

Sorting Out For Planting

Conveying Of Trees From Forestry For Planting

What again do you have for Ghanaians besides economic theori...
32 minutes ago