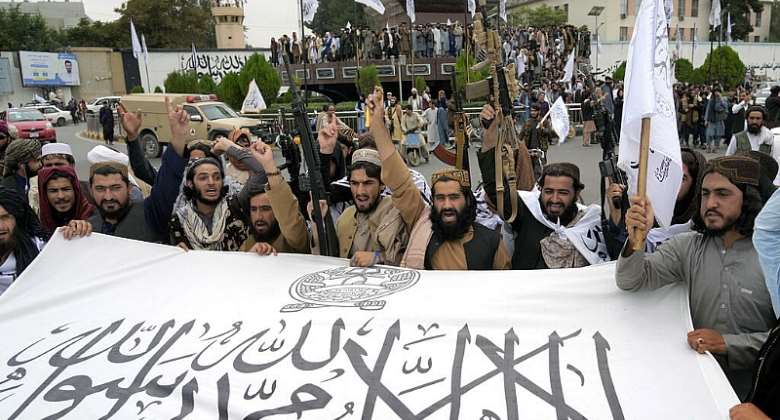 Small groups of Taliban fighters have been marking the anniversary of taking power in Afghanistan last year, in an environment that has drastically reduced women's participation in all daily life, including education, media, and government positions.

Taliban spokesperson Zabihullah Mujahid said in a statement this Monday: "This day is the day of the victory of truth over falsehood and the day of salvation and freedom of the Afghan nation."

Mujahid said this at a time when Afghanis are dealing with malnutrition, drought, and rising poverty.

Those men celebrating their victories one year ago fired gunshots in the air in the capital Kabul, as well as brandishing the group's black and white flag.

Afghanistan is safer than it was a year ago, when they were fighting the US-led foreign forces and Afghan allies. Occasional attacks from Islamic State do, however, continue to occur.

But amidst their cheer, ordinary Afghans continue to suffer.

International donors demand that the Taliban respect human rights, including girls' access to education and for women to work.

This has not materialised, and aid has been cut.

The Taliban says it wants its €8.8 billion in overseas reserves, but the US and others are placing demands on the Taliban that it will not comply with.

The US demands that a Taliban leader subject to sanctions first steps down from his position as second-in-command of the bank.

The Taliban maintains that it respects all Afghans' rights within their interpretation of Islamic law, or Sharia.

"The most obvious problem is there is no uniformity of law," said Zalmai Nishat, an Afghan constitutional expert who previously worked as a government adviser.

Taliban rules as poor get poorer

More than half the population, or around 25 million Afghans, are living in poverty, according to the United Nations, adding that up to 900,000 jobs could be lost this year.

The global body also issued a review in July, indicating that the Taliban was stifling dissent by arresting activist, journalists, and protesters.

So many in the civil society and independent media organisations have fled the country, leaving a vacuum.

A spokesman for the Taliban said that it did not allow arbitrary arrests, rejecting the UN review.

"We are all heading to darkness and misfortune," said Amena Arezo, a doctor from south-eastern Ghazni province. "People have no future, especially women."