Making a difference when responsibility beckons 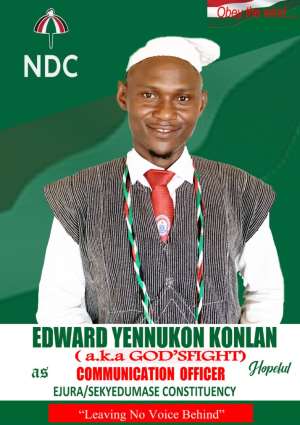 Fellow comrades, I have had the rare privilege of being in active service to the NDC as a constituency communication team member for the past three years. This period of service to the party, coupled with my social activism for Women and Persons Living With Different Abilities (PWDAs), has helped me to refine my skill in communication. That recognition got me involved in advocating for the establishment of the NDC Disability Desk in 2019 that now speaks for such vulnerable minority groups in each constituency. Aside that, I am the first and current Majority Leader in Ejura/Sekyedumase Youth Parliament which has the mandate to supervise and summon all Heads of Department under the Administrative jurisdiction of the Assembly except the Member of Parliament. Consequently, I served as the PWDAs Coordinator as well as a campaign team member for election 2020 that secured our seat.

Fast forward, a perfunctory observation of the status quo indicates that the party's philosophy and its social democratic ideals, that underpinned the conduct of our founding fathers have been jettisoned. Many appeared crestfallen with the current trend of affairs in the party and needed a change that can revive their loyalty. Such were or are moments where responsibility literally beckons all of us as comrades to arise and be held to task if we want the party to progress. Upon sober self reflection, and further consultation, I have resolved to present myself as a competitive choice for the Constituency Communication Director's office when nominations are officially opened.

Comrades, for the avoidance of doubt, trite knowledge has it that, we can no longer sing the NDC's anthem ..... "from victory unto victory ...... our strength in unity" because reintegration of our lost members to promote cohesion is never our concern. We have had to contend with clear manifestations of the politics of entitlement where decisions of leadership continuously fell short of both party's interest and what reality and history has in stock to dictate. It has often been a show of personal ambition over teamwork, double standards and manipulation as evidenced by the penchant for communicating through inappropriate channels and responsibility usurpation even by none executive in some instances. Indeed, let me also acknowledge that despite these divisive tendencies, various structures of the party have persisted in working more diligently for less and many others at the grassroot have made countless sacrifices without commensurate appreciation yet, there is no apparent hope in sight to effect a real progressive change. As a consequence, there is a growing sense of neglect, apathy and discontentment among the generality of the grassroot. It has therefore become critical for those of us in the communication team to reposition the party's communication machinery in a manner that restores the golden but lost sense of collaboration over exclusion without which unity of purpose and selfless service cannot be elicited from our rank and file.

Comrades, our victory in 2024 General Elections is predicated on building a formidable united front, from which, an effectively resourceful communications machinery can be assembled to prosecute the NDC's gospel. I believe it would take fresh dynamism to rekindle the dead spirit of teamwork right from the branch level and superior organizational skills to tap into the collective expertise and experiences of all, to create the vibrant research-based communication vehicle, that would deliver to us a historic victory.

I am not oblivious of the daunting nature of the task ahead. However, I am convicted by the fact that the solutions to our challenges are within reach but that has to take a radical and credible change in communication to renew that lost enthusiasm of belongingness within the party.

This account is what has informed my inseparable all-inclusive vision and mission known as operation "Leaving No One Behind" (LeNOB). It is a social democratic principle inspired by a framework for collective action and very central to our transformative progress as a party. It is the basis for which, branch communicators' skills would be nurtured and honed at vantage information centres in each electoral area, alongside the NDC affiliated Assembly members taking turns at that level to address pertinent socio-political issues. It will inform the pragmatic steps to be taken to identify potential women for inclusion in the communication team to strengthen their voice in our political discourses. Comparatively, I am convinced that women in politics use the best language not only to encourage participation in decision-making but also, persuade, not just inform and so they unleash greater influence on electorates than men do. Empowered women, bring on board diverse and proactive measures that will improve communication content especially when it comes to the use of social media and door-to-door campaign.

In furtherance, periodic organization of seminars at the constituency level for purposes of capacity building and networking with regional and national communicators shall be at the forefront on my agenda. Again, through innovation, an incentive mechanism to attract and sustain party communicators and serial callers alike shall be instituted and pursued vigorously. I have also observed with dissatisfaction, the pathetic expectations of the our Member of Parliament (MP). The key role of the MP as far as development is concerned shall be demystified through dialogue forums between the MP and constituents on bills pending before Parliament to promote effective representation. Finally, in my quest to ensure ethical communication that critique issues with recommendations, the NDC's core values and principles of Probity, Accountability and Social justice as enshrined in its Constitution shall not be compromised, in that, we can have the moral authority to confront internal excesses dispassionately as communicators.

However, this lofty ambition to offer a paradigm shift with new leadership that breaks the barrier and builds the future for all cannot be attained single handedly without your unflinching support as delegates.

I count on you to take charge of the coming change, as I step forward to offer my humble self to you, the delegates in Ejura/Sekyedumase constituency as a competitive choice for the communications' office.

Real Change, Real Progress For Many Not The Few.

Long live our bond in Unity, Stability and Development!