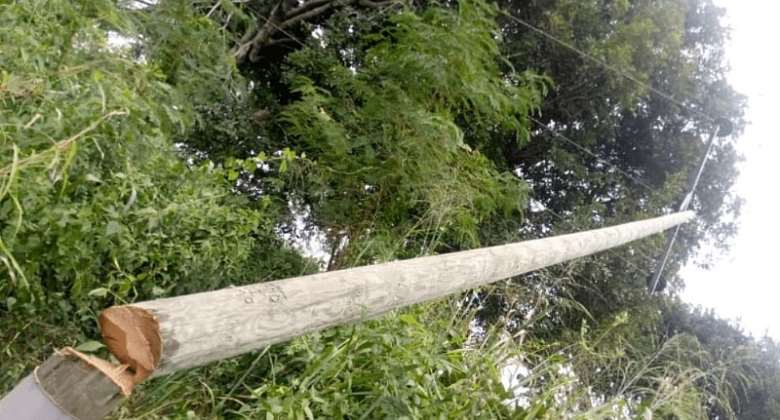 The Managing Director of the Electricity Company of Ghana (ECG), Samuel Dubik Mahama, has said the damaged electric poles in Yilo Krobo in the Eastern Region have been fixed.

He assured that conversations are ongoing between ECG and the people of the rea to bring calm.

Some unidentified persons cut down Electricity Power pole at Okwenya in the Yilo Krobo Municipality of the Eastern region.

The Assembly Man for the Okwenya electoral area Seth Tetteh, confirmed the incident.

“We experienced light out around 11:30pm Thursday night ,we felt it was a usual light off. Only to wake up to find one electric power pole cut down, with a chain saw guess,” he said.

Mr Tetteh further explained that officials from the ECG and the Military were at the Okwenya community to asses the Power pole.

“The ECG manager and some Military personnel came to check the Power pole, they promised us that the Police will be in our community. We pray they come to fix the pole for us,” he said.

Speaking in an interview with TV3’s Alfred Ocansey on the Ghana Tonight show Wednesday August 10, the ECG boss Mr Mahama said “Electric pole was cut down. The truth of the matter is that electricity is a grid, it is a loop, so you don’t think that because you have seen a straight line, that is the line that goes to other side and it doesn’t go to the other side.

“The line was cut down and group of military men and my staff went there and they have replaced that line. Conversations are still ongoing for us all to do the right thing and to restore power to the area.”