Nairobi's People's Parliament: lively debates on who will be Kenya's president 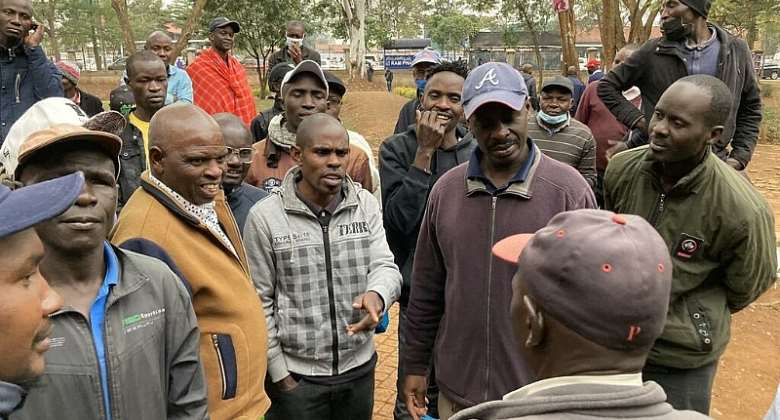 In a small, tree-lined park in Nairobi's Central Business District, a group of 80 men are speaking, debating, and persuading. They come from all parts of the country, and meet up regularly to discuss politics.

During Kenya's election campaign period, which ends today, some tempers may be hot. But here at People's Parliament, respect is the key word of any debate.

“Everyone here is welcome. Everyone is free to contribute, and we are very cohesive - we exist with each other,” said Samuel Obiero, the chairman of People's Parliament.

Obiero, dressed for the colder weather in a black hoodie, had been standing outside a circle of debaters when this journalist approached.

Those who wish to participate must hold a small stick, which gives the person the floor. Voices are occasionally raised.

“We do civic education and advise the public through social media, and that's how we've been able to shape the conversation of politics in this country in this space. We are trying to shape opinion across the region, and the country,” said Obiero.

No more ethnic politics
Taking the stick, and the floor, is John Olum, from Maseno, in western Kenya. This is a historical election, he says, because outgoing President Uhuru Kenyatta, addressed the issue of how only two communities have been elected president since independence.

“They're saying, this time around, let's have another person coming from a different community,” said Olum.

“It's very encouraging. At least Kenya will feel that sense of belonging which has been lacking.”

But by eliminating this ethnic divide, one of the main opposition presidential candidates, William Ruto, is trying to create other sorts of tensions, according to John Kimani, from Limuru, central Kenya.

Kibera's talking walls use art to spread peace during elections

An admitted supporter of Ruto's main rival, Raila Odinga, Kimani says that Ruto had gained ground in his central region, but that through civic education, some Kenyans changed their minds.

“Deputy President Ruto had tried to convince people that there is no more struggle between the communities, but it's between the rich and the poor. And these were lies, to try and convince the poor and illiterate who actually don't know what is happening,” he said.

“The mentality here is changing,” he says, adding that this argument was a valid demonstration of Ruto's character.

“Odinga has a high probability of winning. People have a lot of confidence and we hope he will correct the problems we are experiencing, especially on economic matters,” he said.

Where are the women?
While the men speak of their love of discussion, there are noticeably no women—none speaking, none listening, none present. Kimani maintains that men are hard-wired for political discussion.

“Men for sure like politics, just like the way we like football. When we are free, we come here. But the majority of women don't like politics,” he claims. When challenged, he maintains that Kenya has a different culture.

He says that not many women are elected here in Kenya perhaps because they are not as knowledgeable about politics.

The gender bias in Kenya, and specifically related to political campaigns, continues to be an issue. Harassment on the campaign trail is well-documented, and women's participation in running for office remains low.

“Based on these cultural obstacles, women who venture into politics are largely judged on femininity rather than on substance,” writes researcher Maina wa Muntoya.

Rooting for Ruto
While many in People's Parliament stated that they favour and would even vote for Odinga on 9 August, one man in a purple jacket took the stick and began to speak.

“On my side, I know William Ruto is going to win,” said Arnold Mokura, originally from Kissi County. His response was met with polite laughter.

"I am a supporter of William Ruto, and his 'bottom up' ideology,” he says, naming Ruto's plan to revitalize Kenya's economy and assist the poor.

Kenyatta politically sidelined Ruto, the current deputy president, in 2018. Kenyatta joined forces with Odinga, announcing his decision by shaking his former arch-rival hand, and supporting him in the current presidential race.

Kenya's farmers say they are tired of empty election promises

Mokura says that the handshake, which also stopped post-election violence, was a positive thing.

But other projects Kenyatta tried to carry out with Odinga, such as the failed Building Bridges Initiative (BBI) which tried to change the constitution, was a symbol of this Odinga-Kenyatta alliance, in his opinion.

“They started projects that were not budgeted for—for example, BBI, and they misused a lot of money.

“The handshake was good, but when the man [Odinga] came in, he confused the president,” he says, to laughter in People's Parliament. "And then everything went wrong.”

Naysayers on bottom-up policy
Also from Kissi County, but with a different point of view, David Mwoma, an older gentleman in a red cap, says that Ruto is surrounded by advisors tainted by scandal, mentioning Ruto's tenure as agriculture secretary during the Mwai Kibaki government, and how he was suspended, then shuffled to a less glamorous portfolio in 2010.

Part of the problem with Ruto's economic plan is that it hasn't been explained properly, he says.

“Ruto has come with a very strange economic model, which he calls, 'bottom up'. This bottom up, I've never seen it work anywhere. We ask them how does it work, and they just tell us 'bottom up,'” he says.

Kenya has the capacity to create its own solution to the economic crisis, he says.

But hard questions need to be asked by voters before going to the polls.

“Can we trust you? Will you implement? Because policies are there. The culture of corruption has been entrenched in this country,” he added.

Wearing a backpack and a thick beige scarf to ward off the chilly Nairobi air, David Oyare, from Kisumu county, who normally resides in South B in Nairobi, agrees with Mwoma.

“As you see with my bag, I'm marching home to vote. By August 9th I'll be there,” he says, referring to election day.

Bottom-up is a modern economic model, he says, but says there is no money in the treasury to fund a bottom-up policy, and Ruto's Kenya Kwanza team do not have the capacity to put it in place.

“Even though it is a good policy, the associated team are not credible and cannot implement it,” said Oyare.

“If we visit the modern bottom-up economic model in other regions, the first thing you'll see is that the other countries that implemented it were corruption-free.

“We want to see government resources in the account, waiting for the budget.”

Saturday marks the final day of campaigns, and both Odinga and Ruto will be wrapping up with rallies in Nairobi taking place at the same time.

The majority of debaters at People's Parliament say they will be in line to vote at their prospective polling stations as well.

Latest Photo Reports
Catch up with all the political quotes from our politicians.
Advertise here
More from Kenya
ModernGhana Links
Vote count begins in Kenya as the country waits for their next president
Kenyans vote in close-fought election race
Hope for change, prayers for peace as Kenya votes
TOP STORIES

'Men should admit failure in leadership and pass on the mant...
50 minutes ago