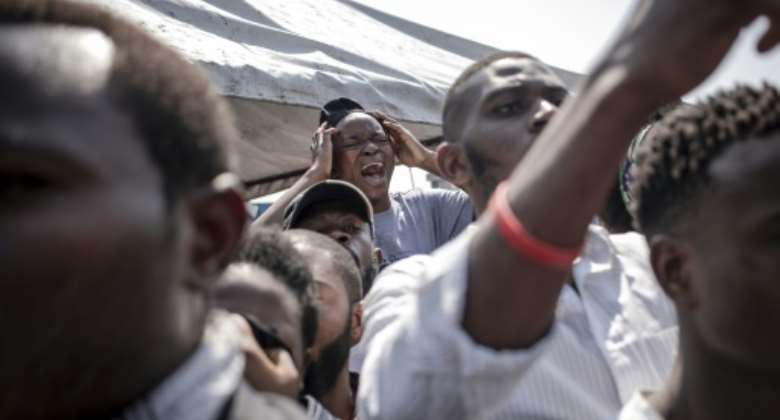 A girl mourns the death of her brother at Friday's funeral. By Guerchom Ndebo (AFP)

Last week, demonstrations demanding the departure of the UN peacekeeping mission, known as MONUSCO, took place in the eastern city of Goma and quickly spread to several towns in the east of the country.

Thirty-two civilians and four UN peacekeepers were killed during the protests, according to a government tally.

Anger has been fuelled by perceptions that MONUSCO is failing to do enough to stop decades of armed conflict. More than 120 militias operate in the DRC's troubled east.

On Friday, a crowd gathered to pay respects before the coffins of ten of the protesters in a stadium in Goma, an important commercial hub of about 1 million people.

Health workers carry the coffin of an activist killed during a demonstration against UN peacekeepers last week. By Guerchom Ndebo (AFP)

Mourners chanted slogans hostile to the peacekeepers, according to an AFP journalist, and touted banners reading "MONUSCO is killing Congolese people".

"We will continue to fight to expel this army from our country," said Josue Wallay, a member of the activist group Lucha that spearheaded the protests.

After the ceremony, the 10 bodies were buried in a graveyard on the outskirts of the city.

The United Nations first deployed an observer mission to eastern Congo in 1999, and established MONUSCO in 2010 with a mandate to conduct offensive operations.

The peacekeeping operation is one of the largest and costliest in the world, with an annual budget of around $1 billion.

Late last week, the DRC's government requested the expulsion of MONUSCO spokesman Mathias Gillmann, citing "indelicate" remarks that he had made.

Thirty-two civilians and four UN peacekeepers were killed in total during the protests last week, the government says. By Guerchom Ndebo (AFP)

Gillmann had told a journalist that the UN lacked the military means to defeat a notorious armed group called the M23, according to a senior government official who asked for anonymity.

The militia had lain mostly dormant for years before resuming fighting last November, capturing swathes of territory in eastern DRC.

An unpublished report by independent experts for the UN Security Council, seen by AFP this week, pointed to neighbouring Rwanda backing the M23.

The Congolese government has repeatedly accused Rwanda of supporting the M23, although Rwanda has denied the claims.