Why people who are most-impacted by climate disasters get subtracted from policy making? 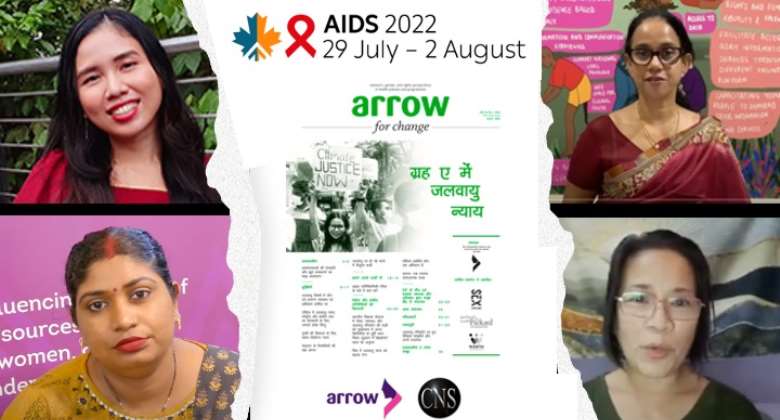 An important publication launched at the opening day of world’s largest AIDS conference puts spotlight on not only the interlinkages between climate justice, gender equality and human rights, but also on differential vulnerabilities to climate change of people in Asia and the Pacific region.

This publication “ARROW for Change: Climate Justice in Planet A” (English, Hindi/ हिंदी) of Asian-Pacific Resource and Research Centre for Women (ARROW) looks into the integration of women, girls and LGBTQIAP+ people’s needs in climate change action, with a specific focus on health and climate change. It brings forth the voices of youth and their inter-generational concerns, and documents success stories and advocacy strategies that have led to just transitions in the Asia-Pacific region.

Sivananthi Thanenthiran, Executive Director of ARROW said while launching the Hindi translation of “ARROW For Change: Climate Justice in Planet A” at the 24th International AIDS Conference (AIDS 2022): “in these last two years the world has been thrown into disarray by the COVID-19 pandemic but simultaneously, slowly in the background, the effect of climate change on our world has also been unfolding.”

She further added that disruption of health services and de-prioritization of sexual and reproductive health services meant that health became inaccessible and HIV services, such as voluntary counselling and testing, access to lifesaving antiretroviral therapy, and referrals to other needed services, also were disrupted for all those who were living in areas reeling under extreme climate events, such as floods.

When confronted with climate disasters, communities adapt. For some it meant walking further distances for food, water and fuel. “Girls and boys face increased risk of violence of which not only pregnancies but sexually transmitted infections, such as HIV, increased during this time. Communities affected by floods and drought often have to migrate across boundaries or borders which often see increase in unsafe sex practices due to inaccessibility of commodities as well as inability to negotiate sexual boundaries,” said Sivananthi Thanenthiran. More importantly she pointed out how climate change exacerbates the inequities felt by already marginalized communities such as sex workers, gay men and other men who have sex with men, and transgender persons.

Menka Goundan, Executive Director, Women’s Fund Fiji, who is also part of ARROW’s Programme Advisory Committee, said that “Pacific island countries have contributed the least to greenhouse gas emissions but face the worst wrath of climate-induced disasters each year. Most damage to the ecosystem, stratosphere and space, is within the zone of the pacific ocean. This is increasing the heat waves, and increasing the temperatures rapidly around the pacific ocean. This has resulted in sea level rise for many pacific island countries. Small pacific island countries like Nauru and Tuvalu are at the brink of being fully immersed in the ocean.”

“Pacific women have been at the forefront of climate justice since the time of nuclear testing in the pacific in the early 1980s and 1990s. Pacific women have led the conversation around climate and environmental justice in the pacific. We still see women’s experiences are not as highlighted when it comes to climate justice work. We have been systematically subtracted from conversations and policy making around climate justice. Many Pacific island countries are moving towards efforts around climate policies but are they taking into account women’s sentiments and lived experiences is another question,” she added.

Noted climate justice activist Tetet-Nera Lauron from Philippines said that “climate crisis is impacting progress made towards gender equality, closing of gender wage gaps, maternal health, and sexual rights. More disruptive disasters displace women and girls and damage physical infrastructure that cater to their reproductive and sexual health. Studies including those made by ARROW, show how the climate crisis increases the incidence of gender-based violence related to the scarcity of natural resources and how women and girls travel farther distances to secure food and water.”

She added: “we must not accept business as usual as we deserve more not just from the climate negotiations but we deserve more from the institutions of global governance that supposedly serve and uphold the interests of people and planet.”

Fithriyyah Iskandar, a doctor of medicine and environment youth activist called for more inclusion of young people in climate negotiations and policy making. “Future generations will experience the worst case of the climate scenario. These undesirable climate conditions will also result in depletion of natural resources and will have a significant societal impact such as population migration and economic dislocation. So, youth who are part of the future generation should be heard and involved in the decision making processes at all levels.”

Shobha Shukla, founding Executive Director of CNS (Citizen News Service) said that, “it is essentially a feminist response that can deliver on the goals such as those of ending AIDS, achieving gender equality, and climate justice. The current response often is not rooted in principles of development justice. That is why we need a feminist model as it is about solidarity. The opposite of patriarchy is not matriarchy but solidarity. Patriarchy is about using power and violence against other people in order to gain power. The opposite of that is feminism - using care and solidarity to change systems and share/ redistribute power.”