The origin of Fontomfrom (the Akan talking drum) 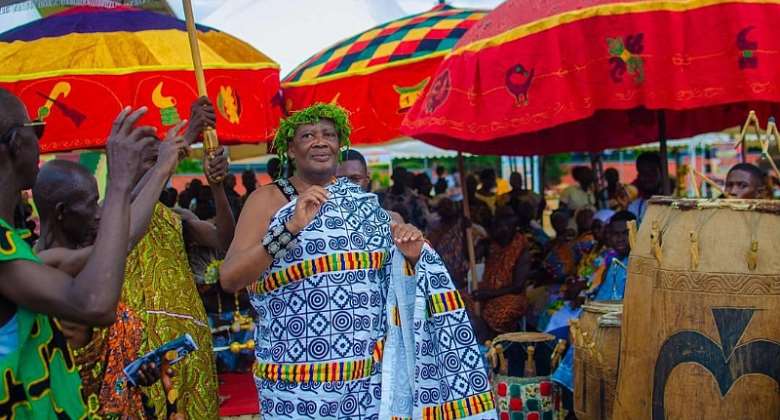 Wreckage of the old Bono kingdom leaves much to be desired, and the nostalgia for its rebirth grows stronger by the day, especially amongst the teeming youth.

Culture and tradition in its excellence was awakened from the ashes of yesteryear when all sons and daughters of the Bono land converged in Sunyani, the Bono regional capital for the Meko Bono Homecoming Festival. The first of its kind. The better of Bono was in high display.

Monarchs and their entourage were welcomed to the durbar ground by the Fontomfrom drummers. Beautifully clad in their rich Adinkrah Kente apparels, shielding them from the sunshine and intermittent June-July showers were the Ahenfo Kyiniyɛ, the bespoke umbrella for kings bona fide Bono. Worth mentioning is the ostentatious Bi-Da-Bi -Akyi Kyiniyɛ with a small umbrella sitting on top of a bigger one designed by Akumfi Ameyaw II, a 17th century Techiman King whose reign spanned (1649-1659). It signifies that, irrespective of how great that user of the insignia is, there's a smaller powerful chief he leans on. A case in point is Techimanhene and his uncle Buoyemhene.

Possessed by the spirit of drumming, and their bodies oiled by their sweat to reveal their masculine muscles, the drummers struck their sticks on the skins or the hyde that covered the cylindrical wooden instruments and they produced danceable tunes.

Long before necessity birthed the invention of technological gadgets that sent information through megaphones, amplifiers, radios and the current craze of the internet, the Bono people used Fontomfrom to send information across the length and breadth of the kingdom. The drums were placed at mileage intervals, and a line of drummers echoed one message across in succession.

Hence, the Bono people were mandated to know the language of the drum. Or else, as expressed in the Bono proverb: "wowrɛfiri wokuromhene kyerɛma a, woyera wɔ adwabɔ ase". To wit: "if you forget the drum appellation of your chief, you lose your way at a durbar".

And indeed, there are still guardians of the pristine, beautiful Bono culture.

As mentioned earlier, at the recent Meko Bono festival, the Fontomfrom drums spoke in their originality, and their language was understood.

In focus, as depicted in the cover photo accompanying this story, the Kurontihene of Buoyem, Nana Ampomah Frimpong II, was doting on the eyes of beholders with his dance moves.

On his head was covered with the fortified Nyanya leaf (Momodica Foetida). That made him impervious to any evil eye at the gathering that would assail him spiritually. This same Nyanya leaf with its many healing powers was undoubtedly worn by almost all the chiefs, priests and traditional believers gathered there. When Nana hangs this spiritual leaf to dry up, it becomes a priced commodity for nursing mothers who will need it to heal viral and bacterial diseases in their children.

Upon the knowledge of his fortification with the potent Nyanya leaf, Nana Ampomah still observed the custom of respectfulness. He gestured to the drummers to give him good company to show his traditional dancing prowess. If one naughtily denies them such respect, the drummers can slant or in plain language, insult you through the beats they play. Or worst, they can quit unceremoniously and shamefully leave you forlorn in the middle of the gathering.

After according the needed respect to the drummers, the Buoyem Kurontihene begged for leave of the chief that was appointed the overseer of the day's gathering, and gaining his endorsement, he pointed to the heavens and Asaase Yaa, the earth on which he walks, indicating that the Bonos believe in the supremacy of the Godhead, and motherliness of the earth that gives food and shelter for the living and the dead.

It didn't take an interpreter to demystify the communication between the dancer and the drummers, but custom demanded that a Bono native grab it with no braininess. 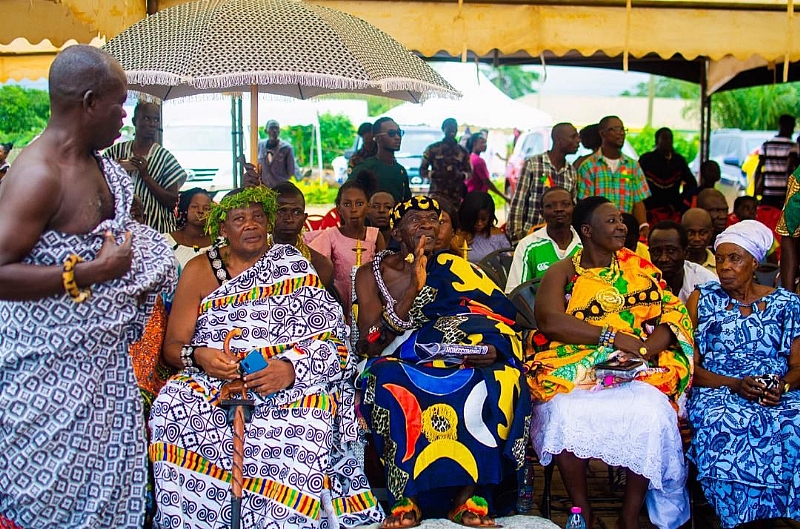 Today, apart from what was kept on tape and to be replayed for learners and posterity, the perpetuity of the Bono culture wouldn't be seen in this grand style until the next Meko Bono Festival. It is not like the Bono of old where the people lived in one kingdom under one king. The splintering of our kingdom is wearing thin the beauty of our culture, and if from the ashes a new Kingdom is not erected with one figurehead, I can't sound like a prophet of doom, but this beautiful culture will be threatened with extinction in the foreseeable future.

It will not take us swords and truncheons to covet, plunder and gentrify what others have built with their sweat. But the unity we need. The readiness to respond to the origins of the Bono Fontomfrom, as it calls us to duty in our quest to rebuild the Bono Kingdom to reach the skies, its rightful place, as dreamt of by the forebears.

More from Feature Article
ModernGhana Links
The Akoto Factor; The Unprecedented Agric Growth Figures Under the Fourth Republic of Ghana
The Operational Ways And Methods Of Death On Earth
Why Moringa must be digitally cancelled: For its many egregious ESG infractions in trying to hijack B-BOVID from its founder Issa Ouedraogo
TOP STORIES