My Response To The Defence Headquarters 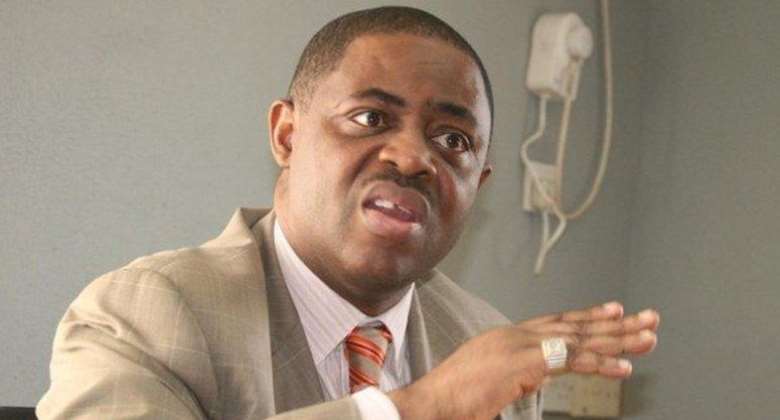 I read the response from Defence Headquarters (dated 9. 7. 2022) to my video about the insecurity in the country and the attack on Kuje prison and I was utterly amused.

Given the gravity and seriousness of the deteriorating security situation in our country I did not know whether to laugh or cry when I read through it.

I would advise strongly that the military High Command and Defence Headquarters spends it's time facing up to and fighting the terrorists that have turned our nation into a functional killing field and horrendous bloodbath and abattoir over the last few years and attempt to carry out their constitutional role of protecting us from enemies within and without rather than trying to engage me in a press war or cow me into silence.

They mentioned my so-called "antecedents" so let me say this: if they knew anything about my real antecedents they will appreciate the fact that attempting to threaten or intimidate me into not pointing out and exposing their abysmal failures can never work.

For the record I have nothing but respect and admiration for the ordinary rank and file and junior and middle rank officers of our Armed Forces who have sacrificed so much, including their lives, and who continue to do so even without the necessary backing and support that they need and deserve from the present Military High Command.

Many of them have fought hard and died on the front line of battle in the most gallant way despite the difficult circumstances they have found themselves in and the uninspiring and poor logistical and moral support they have been offered by their senior colleagues.

Worse still thousands of our civilians have been kidnapped, butchered and subjected to the most horrendous acts of evil and violence by the numerous terrorist organisations that have invaded and plagued our land.

All this yet we are supposed to sit by idly and clap for our military field and operational commanders when things are clearly going wrong?

Call it "rabble rousing" if you like (as they did in their press statement) but the overwhelming majority of Nigerians are appalled and disgusted with the degree to which our security situation has degenerated and are demanding that the Military High Command either goes or does far better.

Their glaring and embarrassing failures are as repugnant to them as it is to me.

Nigerians are also utterly disgusted at the disdain and contempt with which they carry out their duties and their utter insensitivity to the plight of their own soldiers and the concerns of our people.

They speak of my so-called "ignorance" but is there anything more ignorant than attempting to compel a civilian not to criticise the leadership of the Armed Forces of his country where and when they have failed woefully in their duties and obligations?

We criticised, risked all, suffered to no end and fought military rule for 7 long years when their predecessors in office and very senior colleagues annuled the June 12th election and held power from 1993 till 1999 but now that they have left office and we are in a civilian dispensation they believe we dare not or cannot legitimately criticise them when they get it wrong?

Such delusion and self-serving, self-seeking and vain fantasies beggar belief.

The truth is that I have no business with any serving military officer but rather with the serving Minister of Defence who though a civilian like me, you must report to under the constitution.

As a former Minister myself and out of respect for his office and person, I will formally and privately raise my concerns and the issue of what I consider to be your glaring incompetence and lack of patriotism and professionalism with him.

I will also give him my recommendations.

This is the best that I can do in the circumstances and that way I would have at least satisfied my conscience and be able to sleep at night.

It is left to him and President Muhammadu Buhari, our President and your Commander in Chief, to exercise their discretion and do what they want with it.

They can either take the necessary action or not.

Either way I have NO respect for the leadership of the Armed Forces as presently constitutued and neither am I compelled to do so by decency, morality, the constitution or the law.

The truth is that I am disgusted by their poor performance and utterly ashamed of their shameless impunity.

A citizen complains about the fact that our people are being killed and instead of showing remorse for the dereliction of their duty they are spending their time issuing puerile, infantile and meaningless press statements and trying to rationalise their recurrent and consistent failures.

If you want our respect then do please better. If you do not want to be criticised then work harder.

If you do not want people to demand for your sacking or resignation then do your job and stop seeking to intimidate, attack, discredit or undermine those that criticise you.

I am not an enemy of the military but rather a true friend who is candid and courageous enough to speak the bitter and plain truth even where others dare not.

I am merely saying what millions are thinking and know.

Again I am merely a concerned citizen who is genuinely worried about the way things are going in our country when it comes to security and other matters.

When the leadership of our Armed Forces have got it right on past occassions I have commended their gallantry, professionalism and courage and this is on record.

Given this when they do not rise up to the occassion and their performance is below expectation I reserve the right to criticise them, point out their shortcomings and call for their resignation or removal.

That is the way things work in a nation which prides itself on free speech and given the fact that this is a democracy with laws and a constitution.

We are not a under a military dictatorship and the Military High Command or Defence Headquarters who speak for them cannot silence us or expect us to remain silent when they get things wrong.

I believe that if they had any honor and integrity they would have resigned for their abysmal performance rather than spitting in the wind, beating their chests and pretending that all is well.

Given the fact that they have refused to do this, I once again call on President Muhammadu Buhari, as I did in my video, to retire them and appoint Service Chiefs that can do the job properly and meet the expectations of Nigerians.

For this I offer no apology and I stand by everything that I said in that video including the assertion that the leadership and rank and file of the DSS, NIA and NPF have continued to give the necessary intelligence, confront and tackle the terrorists and do their job as best as they can but the Military High Command have not.

Others may be intimidated and compelled to remain silent but I will not.

Numerous Governors, including the Governor of Zamfara state, have publicly and privately called for Nigerians to arm themselves whilst others, like the Governors of Kaduna state and Niger state, have called for greater efforts on the part of the military to seek out, uproot and confront the terrorists.

Other Governors, like the Governor of Ondo state abd indeed ALL the Governors of the South West, have gone as far as to demand that the states and zones have their own Armed militias and police because you have not been able to protect the people.

Such is the level of angst and anger in the land and 7t us essentially a referendum on your performance.

If all was well not one of these respected individuals or anyone else have cause to complain or demand more from you.

Instead of rectifying the situation the only thing you can do is issue a press statement telling me not to complain?

Do we not have the right to call a spade a spade?

This is especially so when lives are involved and so many have been lost.

Should we suffer this indignity and pain in silence?

Are these incessant attacks and slaughter of innocent people not a disgrace to our nation and to our Armed Forces?

Have we lost all sense of pride, dignity and self respect that our soldiers and civilians are being killed and kidnapped by motor cycle riding rag tag bandits and we should just remain silent?

Can we not tell you when we are tired, fed up and had enough of your failures?

Instead of showing remorse and assuring us you will do better in the future you issue angry and insolent press statements in an attempt to silence and intimidate.

The truth is you have simply put salt in our wounds and added insult to injuries.

And whether you like it or not I will continue to point out the failures of our military High Command without fear or favour because they are meant to work for us.

We do not work for them. Rather we pay and maintain them with taxpayers money and they do not pay or maintain us.

They cannot impose a culture of silence on us and neither will we accept it.

Most importantly in a civilian dispensation the military are subordinates of the political class and the people and are meant to live up to expectation.

Where they do not we can ahd must protest and demand fir their removal.

They are not above the law, they are not superior to those of us that are not in the military and neither are they immune from criticism or lawful and legitimate sanctions.

Permit me to end with this.

The way to honor the families and assuage the hurt and pain of our fallen heroes in the military that the Defence Headquarters referred to in their press statement and the loved ones of those civilians that have been massacred by terrorists all over the country over the last 7 years is to fight fight the terrorists with everything you have got in a disciplined, patriotic and honest manner and utterly crushed them.

It is not by issuing angry and nonsensical press statements to members of the public and concerned Nigerians feigning affection for the families of the victims of your own incompetence and all those dear and gallant soups that we have lost.