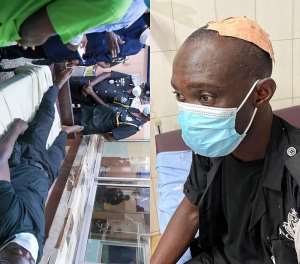 Two of the Police officers that sustained injuries during the violent incident on day one of the Arise Ghana demonstration have undergone emergency surgery.

This has been announced by an official statement issued by the Ghana Police Service on Thursday, June 30, 2022.

In addition, the Police have disclosed that the number of injured police officers has increased from 12 to 15.

“The number of officers who were injured during the first day of the Arise Ghana demonstration, increased from twelve (12) to fifteen (15). All the officers are being treated at the Police Hospital with two (2) undergoing emergency surgery.

“We are grateful to our sector Minister, Hon. Ambrose Dery, Minister for the Interior, for leading a team to visit the officers at the hospital,” parts of a statement from the Ghana Police Service have said today.

It adds, “The Police Administration wishes to express its appreciation to members of the public for their show of love and support for the affected officers.”