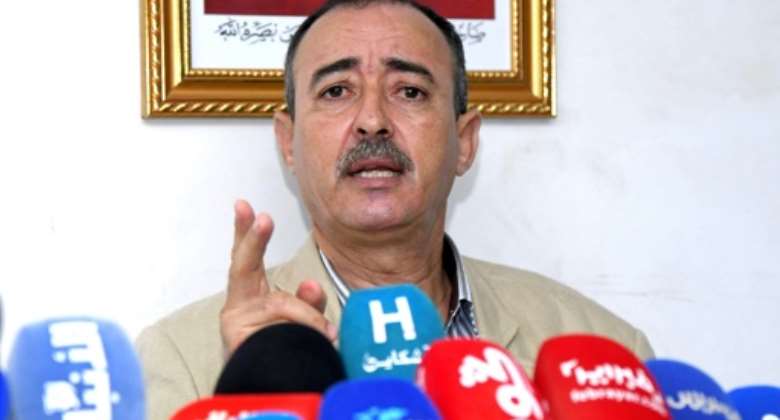 Taher Saadoun, father of Moroccan Brahim Saadoun who was sentenced to death by a pro-Russian court in Ukraine, speaks at the press club in Morocco's capital Rabat. By - (AFP)

The father of a Moroccan facing a death sentence in a Russian-backed breakaway region of Ukraine on Monday urged Russia's President Vladimir Putin to intervene to save his son.

Taher Saadoun made the appeal on behalf of Brahim Saadoun, who was sentenced to death alongside two British men by the unrecognised Donetsk People's Republic (DNR) in early June.

"I call on Russian President Vladimir Putin to intervene, as a father and out of humanism, via humanitarian and unofficial channels," Saadoun told a news conference in Rabat.

The three young men were condemned to death after being accused of serving as mercenaries for Ukraine following Russia's invasion of its neighbour.

His father has previously said his son, who obtained Ukrainian citizenship in 2020, "is not a mercenary", calling him instead a "victim of manipulation".

He also appealed to the government of Moroccan Prime Minister Aziz Akhannouch to "do what is necessary to work on this case".

The young man's father, a retired investigator in the gendarmerie, told AFP the Moroccan authorities had not been in contact with his son.

He was not aware if Rabat had contacted Moscow or the self-proclaimed authorities in Donetsk.

The Moroccan government had not commented on the case until June 13, saying through its embassy in Ukraine that Saadoun "was captured while wearing the uniform of the military of the state of Ukraine, as a member of a Ukrainian naval unit".

It said he was "imprisoned by an entity that is recognised by neither the United Nations nor Morocco", without commenting further.

His father said he had enrolled in the Ukrainian navy in 2021 and was following orders.

Moroccan rights groups have urged the government to intervene to save the young man, citing concerns over his health.