'I won’t criticise Akufo-Addo on my TV show; is the programme for you?' – Paul Adom-Otchere jabs NDC critics 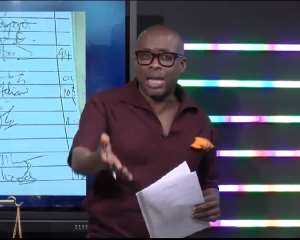 Paul Adom-Otchere has said on his TV programme 'Good Evening Ghana' on Metro TV that he will never use his show to criticise President Nana Akufo-Addo and his government because he has direct access to him to do that.

“I support Akufo-Addo, you support John Mahama; that’s no problem”, Mr Adom-Othcere told his National Democratic Congress critics, adding: “People write to me and say: ‘Why don’t you use your programme to criticise the government?’ Is the programme for you?”

“Do your programme and criticise the government. I don’t understand it. This is private sector”, he fumed.

The Board Chair of the Ghana Airport Company Limited said: “When the Supreme Court ruled in NPP v GBC, they said that the obligation is on the state broadcaster and then you tell me that: ‘Why don’t you criticise the government?’”

“Other people are criticising the government, watch that one”, he retorted.

He said: “Today, we all have media; today we’re all television, so, go on Facebook and ciriticise the government, there’s no problem with that”.

The government, Mr Adom-Otchere noted, “ought to be criticised”.

“Governments are there so that they are criticised” but noted: “If I support Akufo-Addo because of my conviction and I feel there’s something in there that’s not good, that’s not working well, I will not criticise him on this television because I have access to him; I’ll go to him and tell him and say: ‘Mr President, I think so so and so, so so and so’”.

“So, you will not ask me that ‘come out and criticise the government; I will not do that, OK’”