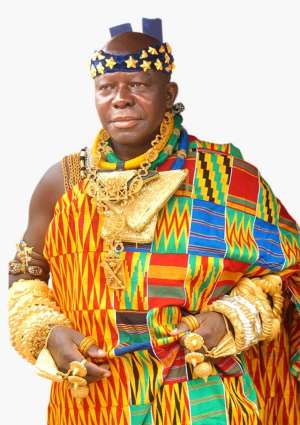 All eyes are on Otumfuo Osei Tutu II, Asantehene to officially launch Asanteman Europe in Amsterdam, the Netherlands, on Saturday July 2, 2022.

The launching event will be the next visit of the Asante Overlord after he visited the Netherlands two decades ago - in June 2002 - where the visit deepened the 200 year-relationship between Ghana (then Gold Coast) and the Netherlands.

The July visit is expected to also deepen diplomatic ties between the Manhyia Palace in the Royal Kingdom of Asante (Africa) and the Constitutional Monarchy of the Netherlands.

The Asanteman Traditional Council of the Netherlands is the host for the launching and that in joint interview, Nana Ama Serwaa Nyarko Kesewaa (Holland Asanfoɔhemaa) and Nana Onipamu Osei Kufour (Holland Asantefoɔhene) hinted that the host country was more than ready for the ceremony.

They said preparations were ready for about 5,000 attendants and that hotels and guest houses were readily available for visitors, expressing optimism that the display of Asante culture will rekindle the penchant for cultural identities among Ghanaians in diaspora.

Chairman of the Planning Committee, Nana Kwabena Opoku, in an interview said the launching will be on the theme: “Empowering the Ghanaian Child through Education - the role of Asanteman Europe” and part of the funds that will be raised at the ceremony will go to support needy but brilliant students for quality education.

Nana Opoku who doubles as Adontenehene of the Asanteman Traditional Council of the Netherlands said some of the funds will go to support some Health Institutions in the Ashanti Region, Ghana.

He added that there will be cultural display in kete, adowa, fɔntɔmfrɔm, etc which will also give attendants the opportunity to learn Asante culture.

The President of the Executive Council, Papa Yaw Agyei emphasised that the formation of Asanteman Europe was not only to reunite Asantes on the European continent, but also to create networking among themselves.

He said through networking, the few who came together before the inauguration had been able to make COVID-19 relief donations which were presented to support health facilities back home in Ghana.

He stated to remind all members that Asanteman Europe is not formed to threaten other tribes of Ghana, but to lead a good example of “respecting and remembering our cultural identities as Ghanaians irrespective of which generation and where we live”.

Papa Agyei however, urged Asantes living in Asia, Oceania (Australia), South America, to also learn from this good example of Europe to be able to reconnect to one another culturally.

The Board Chairman of Asanteman Europe who is also the Asantemanhene of Finland, Nana Ekuoba Gyasi Sempremo Gyima who gave a brief history of the group recalled that Asanteman Europe was formed in February 2018 in Zurich, Switzerland when he and some Asantes living in Europe realised the need to promote Asante culture, especially for the younger generation in diaspora.

The founders he said were living in Finland, the Netherlands, Germany, Italy, Denmark and Belgium and they selected 11 members to be interim Executives who were subsequently elected as substantive Executives to run the group.

He further recalled that the group then agreed to have Congress as its highest decision making body, followed by the Board and then the Executive Council with the traditional backing of the House of Chiefs (nananom) and later decided the official launching of Asanteman Europe.

Hottest Photo Reports
Catch up with all the political quotes from our politicians.
Advertise here
More from Diaspora (Netherlands)
ModernGhana Links
Awuah Ababio officially inaugurates Asanteman Europe in Amsterdam
Ambassador to the Netherlands promises to work in the interest of Ghanaians
Deputy Head of Mission of the Embassy of Ghana in Netherlands lay wreath in commemoration of the Emancipation Day Keti Koti
TOP STORIES