I was severely injured with bruises, blisters after 20 lashes - Female victim of Wa sex tape 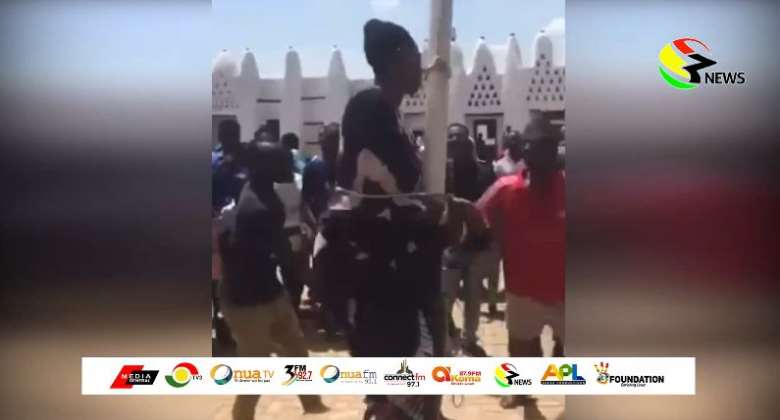 The young lady in the Wa leaked sex tape has opened up for the first time about the events leading to the public flogging by some men at the palace of the chief.

According to Meira (not her real name), she was picked up by a number of young men from her home that day and dragged to the Wa-Na’s palace.

“When the young men came to me, they told me to go with them to the palace and while we were on our way, they kept beating me until we reached the palace,” she told TV3’s Komla Adom who travelled to find her.

She recounts how she was subjected to up to 20 lashes from the men at the forecourt of the palace.

“Among the crowd, I could hear people yell, flog her, flog her. There was nobody to my rescue.”

Adnan (not his real name) the young man who was also captured in the sex video with her had been flogged and released before she got there.

Meira added, “I was severely injured with bruises and blisters on my back and buttocks after they flogged me 20 times.”

“I was left to my fate. I had to call a friend who took me to the Wa municipal hospital for treatment and paid for the treatment; I think it was between five hundred and six hundred cedis.”

The young lady who was visibly shaken during the interaction, often broke down ; sometimes holding back tears.

Meira has been unable to show up at her workplace at the Wa transport terminal where she was a ticketing and revenue collection hand for fear of stigmatization.

She has also abandoned her home since the incident.

“I cannot go back to the station and work after this humiliation and torture. I wish I could get a decent job elsewhere to cater for myself.”

A viral video captured some men publicly flogging Meira and a young man both of whom recorded a sex video, which found its way onto social media.

The flogging according to sources was on the orders of leadership of the palace, as an enforcement of a local law promulgated to ostensibly deal with increasing cases of indecency and publication of nude material by the youth in the Wa municipality.