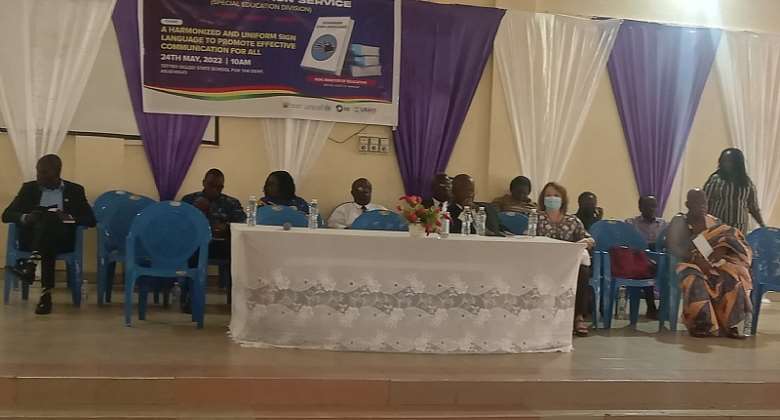 Ghana’s Deputy Minister for Education, Mr. John Ntim Fordjour, has come under fire for allegedly attending a program late whiles invited guests were seated over two hours before his arrival.

The invited guests were seated an hour before the start of the programme at 10:00 am.

Surprisingly, the young deputy minister arrived at 12:14pm while dignitaries including the Mantse of Adjei Kojo and Mrs. Anne-Claire Dufay, Country Representative for UNICEF, the main sponsor of the Ghanaian Sign Language Dictionary, which was scheduled to be launched, were seated.

The program was held on Tuesday 24th May, 2022 at Tetteh Ocloo School for The Deaf, Ashaiman.

Other dignitaries including teachers, headmasters and journalists were visibly angry especially about the fact that they were asked to rise up and welcome Ntim Fordjour who walked gallantly with his entourage into the auditorium which was filled with the frustrated guests and the hearing impaired pupils of Tetteh Ocloo School for the Deaf.

It is worth noting that during the inauguration speech of President Nana Akufo Addo, he called on Ghanaians not to be lackadaisical towards work and also respect working hours. The action by the deputy minister, however, follows calls on Ghanaians by the President of the republic, Nana Addo to attach a high level of seriousness to their line of work.

What was more baffling is that, when it was Mr. Ntim Fordjour's turn to deliver his address, he didn't even have the decency to apologise to the people he had kept waiting for hours, no excuse was also given. This is due to his habitual habit of attending programs late and he didn't show remorse.

Some educationalists said his tardiness showed disrespect for his office and agencies under the ministry of education.

Mrs. Efua Adomako who walked out of the hall after the deputy minister sat down said she arrived at 9:34am and had another equally important event to attend so she could not wait for the programme to end before taking her leave.

"I came here early because I realised the significance of such a programme but unfortunately no importance was attached to this programme by the deputy minister. This kind of attitude of arriving late at events just because a person feels he is better than the guests should be discouraged. Leadership should be set by example… followers will emulate these lazy leaders. What is he teaching those who follow him? I am very disappointed in him. I came all the way from Adabraka. I don't have a car but I managed to find my way here despite the rains but this man has a Toyota V8, personal assistant and a driver yet he disrespects us in this manner," she lamented.

A journalist who pleased anonymity mentioned that he was not surprised at the behaviour of the deputy minister because he seems to have the habit of disrespecting guests at events he's supposed to grace by reporting late.

He lamented that many current government appointees have that habit which needed to be checked.

"You keep guests and sponsors of your projects late at programmes and you do not show any remorse about it? Who does that, UNICEF and other unions representatives were here for a very long time before the programme begun."

Another attendee described the action of the deputy minister as a shame, saying he least expected such behaviour from a young man.